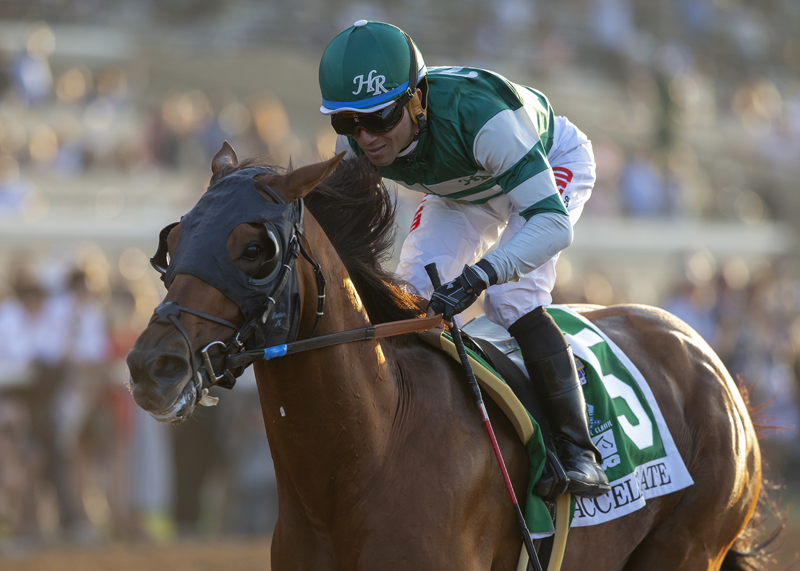 Winning as jockey Joel Rosario pleased, Hronis Racing’s Accelerate, the 2-5 favorite, romped to an easy victory in the 28th running of the Grade I $1 million Pacific Classic, scoring by a record margin of twelve and one-half lengths in the mile and one-quarter contest.

Well-placed from the start, Accelerate lived up to his name with a swift move from the outside on the far turn, opening up a commanding advantage entering the stretch and then under only mild urging from Rosario through the final furlong.

The previous record victory margin in the Pacific Classic was eight and one-half lengths by Game on Dude in 2013. With the win, Accelerate joined select company as only the third horse to sweep the three major races in Southern California for older horses – the Santa Anita Handicap, Gold Cup at Santa Anita and Pacific Classic - in the same year.

Accelerate, providing trainer John Sadler with his first success in the Pacific Classic after eleven tries, returned $2.80, the lowest win mutuel in the history of the event. Previous low payoff was $3 by Gentlemen in 1997.

Accelerate, a five-year-old son of Lookin at Lucky, provided Rosario with his fourth win on the afternoon. For Rosario, it also was his second success in the Pacific Classic, having scored aboard Dullahan in 2012.  Across the board,  Accelerate paid $2.80, $2.40 and $2.10. Pavel, who ran well to be runner-up while threatening the winner, returned $4.20 and $3.40, while third-place Prime Attraction returned $4.20 to show.

Accelerate, who stepped the distance in 2:01.83, won his eighth race in 20 starts and first money of $600,000 increased his career earnings to $2,772,480. Since the Pacific Classic was a qualifying “Win and You’re In” race for the Breeders’ Cup Classic next November, he insured an automatic berth in that event. The horse was third behind Collected and Arrogate in the 2017 Pacific Classic.

JOEL ROSARIO (Accelerate, first) – “He’s a very nice horse. He put me in a good place and took me to the outside and we went from there.”

MARIO GUTIERREZ (Pavel, second) – “He ran good; really, really good. The winner – what can you say. He’s a good horse.”

KENT DESORMEAUX (Prime Attraction, third) – “He tried so hard to win. His heart bleeds to win.”

FLAVIEN PRAT (Roman Rosso, fourth) – “He broke so well that we just went to the front. I saw that he’d run in front down there (in his South American races).  I just let him go on with it.”

JOE TALAMO (Dr. Dorr, fifth) – “I wanted the lead, but we couldn’t get there. Then when we had to run from the back, that wasn’t his style at all.”

DRAYDEN VAN DYKE (The Lieutenant, sixth) – “He just ran out of gas at the end.

JOHN SADLER, (Accelerate winner) – “It was very impressive. He’s been good on this track, he’s won stakes here every year. He’s better this year so you had to figure he’d be better on this track this year. The only thing I was nervous about was Joel (Rosario). I told him ‘Ride him like he’s the best horse. Don’t let anything cheap get in front of you. Stay in contact with the leaders’. He did that so I knew (Accelerate) would kick in well. I wanted to keep them (Accelerate and Catalina Cruiser) separated. We had the best horse and the second best horse and we wanted to use them in different races. (His personal feeling at the moment?) Just relief. I thought we had the best horse. He had a really good week. I woke up this morning refreshed. The toughest thing all day was getting into the parking lot.”

The stakes win was the first of the meet but second (Dullahan, 2012) in the Pacific Classic for rider Rosario. He now has 24 stakes wins at Del Mar.

The stakes win was the fourth of the meet but first in the Pacific Classic for trainer Sadler. He now has 63 stakes wins at Del Mar, fifth most among all trainers.

The winner is owned by Kosta and Pete Hronis of Delano, CA.

KOSTA HRONIS – “We don’t get to see a lot of 5-year-old horses anymore. So this was great that he was able to stay on the track for another year and really mature and get better, and that’s what he has done. I’m so happy for John Sadler. This is his first Pacific Classic win and for this horse to be a part of it is such an honor. We’re happy for us, of course, but we’re so happy for John. He’s done so much and he’s meant so much to us. He’s more than a trainer. He’s trained the horses and he’s trained us. We had no idea about the horse racing business when we got involved in 2010. We thought we knew something. We knew nothing.

“Joel rode a great race. He’s been good all day. When we lost Victor (Espinoza) it was disheartening. I’m glad it was John’s decision. John knew what to do. He felt really comfortable going to Joel.”

(Sweeping the Big Three in California) “That’s such an honor. For him to be in a position to attempt to do that was wonderful. That he actually pulled it off is great. To be in the conversation with those great horses is a thrill for us, no doubt.”

“We love California. Santa Anita and Del Mar. We have opportunities to race out of town, but if there’s a race here. We’re going to be here.”