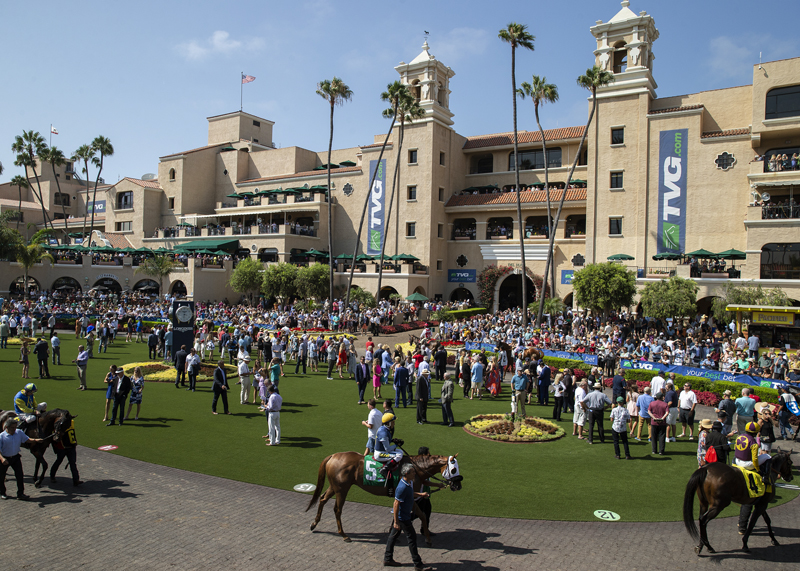 Del Mar kicks off its 80th summer season of racing on Wednesday (July 17) with an Opening Day 10-race program that features the Runhappy Oceanside Stakes.

At one mile for 3-year-olds on the Jimmy Durante Turf Course, the Runhappy Oceanside will be contested for the 74th time and has drawn a field of 12 for its $100,000-added renewal. The popular Opening Day headliner – it has been split in 30 of its previous runnings – is step one in the track’s three step, 3-year-old grass series that follows with the $150,000 La Jolla Handicap on August 4 and culminates with the $250,000 Del Mar Derby on September 1.

Among the likely favorites for this edition of the Runhappy Oceanside are Slam Dunk Racing or Nentwig’s Rijeka and Jerome Moss’ Nolde, both allowance winners at Santa Anita earlier this year. Rijeka, an Irish-bred gelding by Roderic O’Connor, races out of the Richard Baltas barn and will be handled by rider Ruben Fuentes. Nolde is a Pioneerof the Nile colt bred by his owner in Kentucky. He gets Victor Espinoza in the tack.

The Runhappy Oceanside is the first of 40 stakes events worth more than $7.3 million presented during the course of the 36-day summer meeting, which will be conducted on a Wednesday-to-Sunday basis from July 17 to September 1 before closing day on Labor Day Monday, September 2.

The racing apex of the season comes on Saturday, August 17, when the $1 million TVG Pacific Classic will be presented for the 29th time. The TVG Pacific Classic, the richest race on the West Coast, was won by local favorite Best Pal in the inaugural 1991 running and equine stars like Bertrando (1993), Candy Ride (2003), Lava Man (2006), Shared Belief (2014), Beholder (2015) and California Chrome (2016) have added their names to the winners’ list.

The TVG Pacific Classic is the foremost of five graded stakes scheduled on the August 17 program, a first for the seaside track. In total, Del Mar will present 22 graded stakes during the meeting, six Grade I events, 11 Grade IIs and five Grade IIIs.

The first of the graded stakes are scheduled on Saturday, July 20 of opening weekend with the Grade II, $200,000 San Diego Handicap and Grade II, $200,000 San Clemente Stakes on tap. The San Diego is a major stepping stone to the TVG Pacific Classic and the field, to be drawn at midweek, is likely to include its defending champion in Hronis Racing’s multiple-stakes winner Catalina Cruiser. The San Clemente, a key prep for the grassy Grade I Del Mar Oaks on August 17, could draw a pair of classy Irish-bred fillies in Iavarone, McClanahan, or Arntz, et al’s Lady Prancealot and Katsumi Yoshida’s The Mackem Bullet, both of them stakes winners on the lawn.

In 2012, Opening Day of the summer season recorded an on-track attendance record of 47,339 and the numbers have stayed in the 30,000-40,000 range since. The Opening Day Hats Contest initiates a series of fan-friendly events at the shore oval throughout the meeting. Four O’Clock Friday programs include concerts at the west end of the grandstand following the races and major weekend concerts also are   held there. Saturdays and Sundays are “Family Days” with something for all ages.

First post daily is 2 p.m. with the exception of the 4 p.m. starts on all Four O’Clock Fridays.