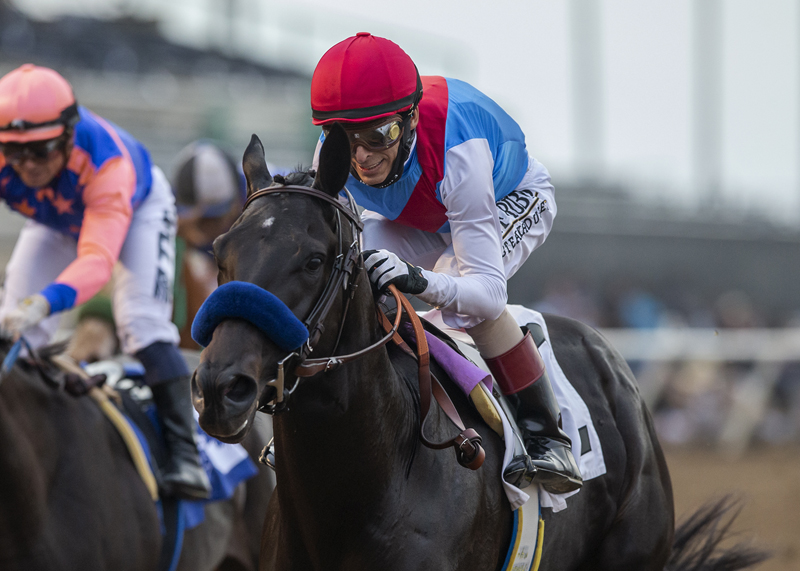 Zedan Racing Stables’ Medina Spirit, this year’s Kentucky Derby winner, made his return to racing after a three and a half-month pause a winning one Sunday at Del Mar when he proved a smart length and a quarter best in the 47the edition of the Shared Belief Stakes for 3-year-olds.

The dark colt by Protonico made the lead out of the gate under Hall of Fame rider John Velazquez and never gave it up, repelling the challenges of his primary opponent – Hronis Racing or Talla Racing’s Rock Your World, who also was coming off an extended break.

The two colts were the center of attention in a six-horse field for their mile testing and they didn’t disappoint, leading the field all the way around the mile oval through fractions of :22.52, :46.92, 1:11.81, 1:24.33 and 1:37.29. Rock Your World stayed lapped on his smaller opponent for a good portion of the trip, but couldn’t keep up inside the quarter pole.

Finishing third in the $100,000 affair was Steve Moger’s Stilleto Boy, who was two and a quarter lengths behind Rock Your World.

Medina Spirit was winning his fourth race in his eighth start and picked up a check for $60,000 to increase his bankroll to $2,345,200. He also has three seconds and a third. He is conditioned by Hall of Fame trainer Bob Baffert.

The track’s Pick Six Single Ticket Jackpot wager once again went unclaimed and will sport a carryover of $294,181 when racing resumes at the seaside oval on Thursday at 2 p.m.

JOHN VELAZQUEZ (Medina Spirit, winner) – “It went the way we wanted it. Once I made the lead into the first turn, I felt better. He was moving well. When he got on the backside, his ears went up and he was really cruising. When a horse would come to him, he’d pick it up on his own. When we got to the quarter pole, I said ‘Let’s go; time to pick it up.’ And he was right into it. He finished strong and the gallop out was strong, too. He can build off this race.”

UMBERTO RISPOLI (Rock Your World, second) – “He ran well. He ran a huge race. He got beat by the winner of the Kentucky Derby. What are you going to do? I can’t ask anything more of my horse.”

BOB BAFFERT (Medina Spirit, winner) “It’s a relief. A Shared Belief relief. It’s good that the fans were here for the showdown. I did not have any intention of running him in this race until a couple weeks ago. I started thinking about it, figuring it couldn’t come up that tough. Then (son) Bode said, ‘You know Rock Your World’s running there?’ For what this horse has gone through he’s such a game horse and I wanted to run him here and see if he likes Del Mar. I’ve never had a Derby winner come back and win here so that’s a first. He looks good and John (Velazquez) said he feels better than ever. There’s still some good racing for him out there. We’re waiting for the process to happen.”

JUAN LEYVA, assistant to John Sadler (Rock Your World) – “Rock Your World ran his race but Medina Spirit is a very nice horse and (gets) my respects; he got the best of us. No excuses.”

The stakes win was the first of the meet for rider Velazquez and his first in the Shared Belief. He now has nine takes wins at Del Mar.

The stakes win was the second of the meet for trainer Baffert and his 10th in the Shared Belief. He now has 141 stakes wins at Del Mar, the most by any trainer.