Fifth Del Mar Fall Session Is Off and Running this Friday 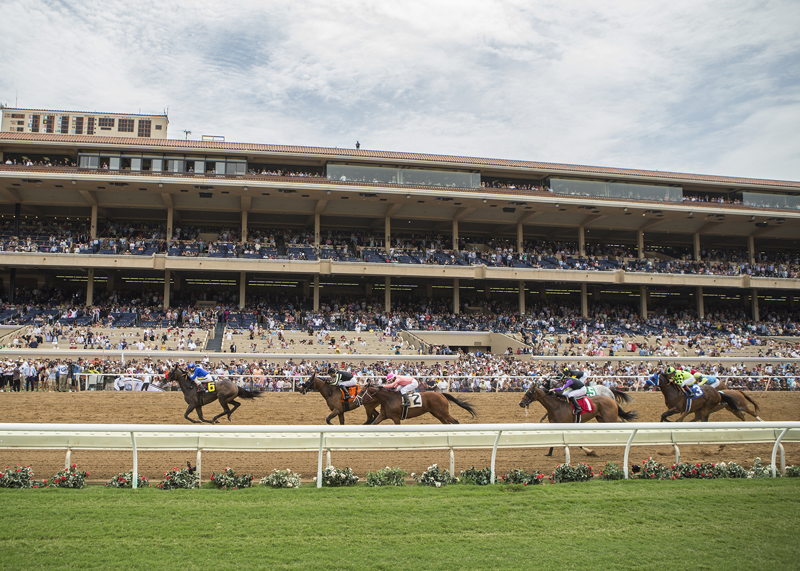 With a growing reputation that puts it at the forefront of the nation’s year-end race meets, Del Mar will present the fifth edition of its fall racing season starting this Friday for a four-week, 16-day run that will bring classy Thoroughbreds back to the seaside oval through Sunday, December 2.

Either eight- or nine-race programs will be offered four times weekly, starting at 12:30 p.m. each day, with one exception: That would be a special Thanksgiving Day (Thursday, November 22) slate that begins at 11 a.m.

Opening weekend will provide a distinctive Monday, November 12 card to salute Veterans Day, but then the balance of the stand will see a Thursday-through-Sunday pattern taking hold.

Right out of the box on Friday the shore oval will stage the Kathryn Crosby Stakes for fillies and mares at a mile on the turf.  It also will conduct a special promotion that provides a free admission, seat and program to all its Diamond Club members, or to any that do the quick and easy sign-up for the popular club that currently boasts more than 300,000 fans on its rolls.

Foremost among the track’s stakes offerings are a pair of $300,000 grass tests on closing weekend – the Grade I Hollywood Derby at nine furlongs for 3-year-olds on Saturday, December 1 and the Grade I Matriarch Stakes at one mile for fillies and mares on Sunday, December 2.

All told, the track will present 14 stakes events with nine of them graded.

The track’s two racing surfaces – the one-mile dirt oval and the seven-furlong grass course with its unique diagonal chute that allows for races of up to nine furlongs – are overseen by two veteran professionals considered among the best in the business. Leif Dickinson as turf and landscape superintendent tends to the deep, green grass layout and Dennis Moore handles the main track in his role as director of track maintenance.

Besides its stellar racing program – now known as the cream of the racing crop nationally during its November run – the track will provide a series of on-site promotions and activities sure to please many of the fans who have come to look forward to the seaside racing headquarters’ “second season.”

Two major “after the races” concerts will be held during the meeting – the first featuring the reggae band Pepper this Saturday, then the other attracting country fans for a performance by the C&W hit maker Easton Corbin on Saturday, November 24.

Admission to the track is $6, but only $3 for Diamond Club members (sign-ups are easiest using the Del Mar Mobile App available on iTunes and Google Play). Children 17 and under are free, if accompanied by an adult.  Seniors (62 and up) are free on all Thursdays, while active duty military are free every day.  Reserved seats cost $4 on Thursdays and Fridays, $8 on Saturdays and $6 on Sundays and Opening Day (November 9).

Advanced seat sales and/or restaurant reservations can be obtained by calling (858) 792-4242, or by accessing Del Mar’s website – DelMarRacing.com