Goats and Horses: A Pairing That Works Well at the Racetrack 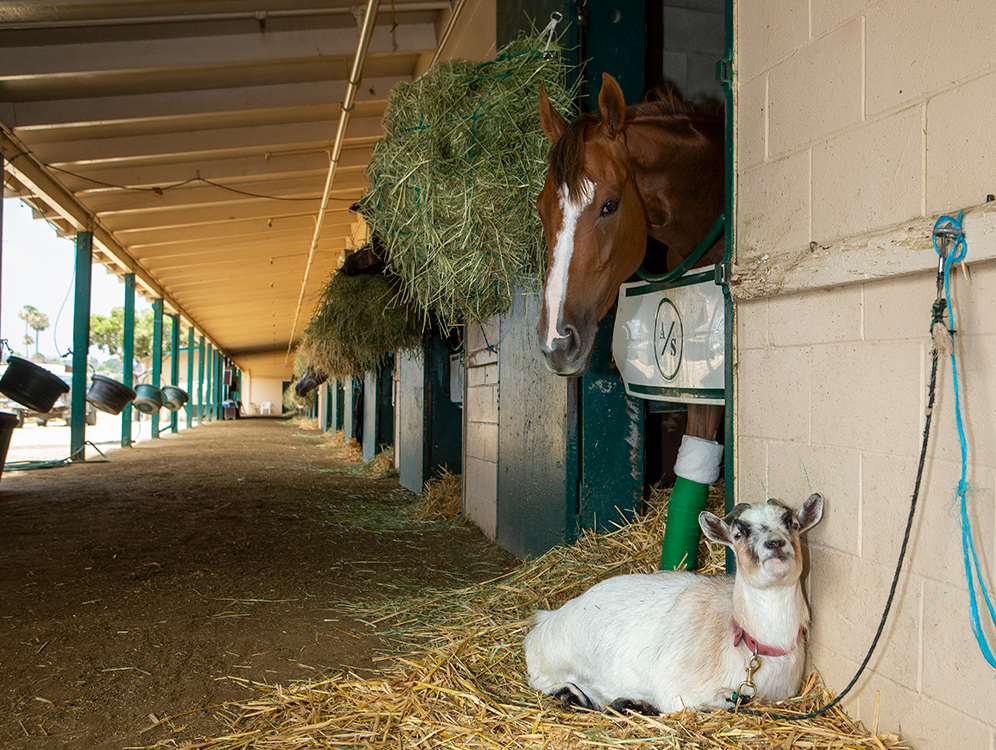 When you think of goats, you usually think of them being on a farm and/or being used for their milk. But they’ve also been known to be pets and – at the racetrack – a friend for a horse in need.

Horse trainer Dan Hendricks has a goat at his barn named Jack. He is one of the larger breeds of goat with big horns and he just might butt you if you make him mad, or show any fear. As far as what breed of goat he is, though, that’s up for grabs.

He came from a farm in Solvang.

“They had four babies,” explained Hendricks, “so they sent two to the track and we got him. The first time they had ever been touched was when they put them on the van and then got him off.  Jack was wild. We started feeding him by hand and in a month or so he came around.  And he’s been pretty good since.”

Hendricks was replacing a goat that got sick and passed away. He had a horse that needed a companion and Jack helped that one and then, when that horse went out, he switched him to another horse.

Goats can help nervous horses. They become their “barn buddies.” Symptoms of a nervous horse can be walking or even running around in their stalls. They also can do what is called weaving, which is rocking side to side. Another symptom is “cribbing,” which is holding onto the parts of the stall, or pen, with their teeth and sucking in air. Often, they also will have poor appetites.

If a horse has any of these symptoms, that’s where a goat comes in.

Hendricks explains that goats give the horses something to think about, as well as a companion. Thoroughbred yearlings and 2-year-olds are kept in pastures on farms with other babies that they run and play with. Horses are herd animals. The horses lose these companions when they come to the track. So the goat can be a comfort to them.

“Ahh, most of the time,” says Hendricks, “but sometimes the horses are indifferent to the goat, until you take the goat away from the horse. When you do that, the goat usually misses the horse more than the horse misses the goat. The horse will whinny and the goat will make goat sounds calling to the horse.”

Goats come in all sizes and shapes. The goat that Hendricks had before Jack was a short chubby goat, rather than a tall one like Jack.

Hendricks, like other trainers, has additional ways to try to calm certain horses.

“I’ll put horses stabled side-by-side together,” says Hendricks. “I’ll take out some of the boards between stalls so they can see each other and become buddies, just enough so they know there’s another horse right next to him. It’s similar to using a goat, though you can’t do it with colts or young babies. But the ones that you can do it with can get real dependent on another horse. That’s why using a goat is better.”

The benefits can be seen in half a day or it may take a week, but giving a nervous horse a companion goat is sometimes the very trick that’s needed. And when it works, the pair can truly bond.

Richard Mandella has trained horses for more than 45 years and has used his share of goats-as-pals along the way. 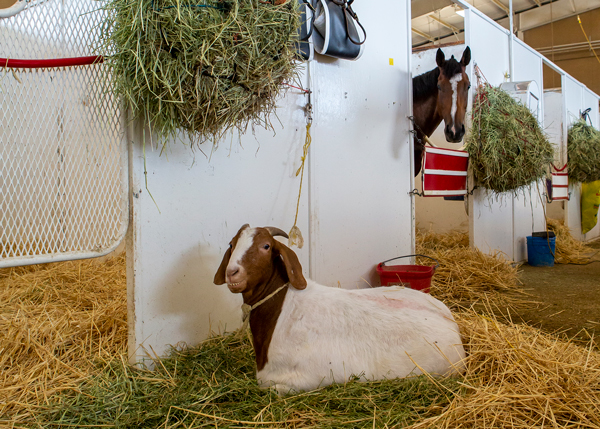 “Oh, they can really help a nervous horse; make a night and day difference,” the Hall of Fame conditioner says. “I’ve used them often with fillies or geldings who need to be calmed down. You don’t want to put them in with a colt or a stallion; they can get too rough.”

Mandella provided a history lesson on the origin of the term “got your goat.” He notes that it comes from racing in England centuries back when goats and horses were often companions. On occasion, a rival might want to unsettle a horse he’d have to face the following day, so he’d sneak into a barn and make off with the horse’s companion that night – thus, they “got your goat” and may have gotten their horse an edge in the process.

Trainer Shelbe Ruis has a miniature Nigerian dwarf goat who is still a baby, just three months old. His name is Kevin. Ruis has been wanting a goat, specifically a small one rather than one of the bigger breeds. Kevin will probably grow a foot taller, and a lot wider. Right now, he’s about 12 inches at his shoulder. (Hendrick’s goat Jack is three feet at the shoulder.) Ruis plans to use Kevin for nervous horses.

Are goats smart? Well, little Kevin knows his name, and Ruis is training Kevin to wander around the barn with no supervision. He knows all the horses and the horses are comfortable with him coming up to their stalls. Ruis is new to having a goat. Kevin is her first. She found him at a farm in Santa Clarita. There’s a woman there that has a herd of 30-40 goats. Many of them are sold for producing milk, but they also make good pets.

According to Ruis, Kevin is great friends with her little dog Buster.

Trainer David Bernstein describes a filly he had that was very nervous: “Without her buddy, she would not only stall walk, she wouldn’t eat, and she would paw and dig holes. But with her buddy they’d both stand there just as calm as they could be.”

Bernstein said other animals can also work, but goats are the best, which is why he’s used them for years.

Trainer Art Sherman, who race rode for 21 years and now has trained horses (including two-time Horse of the Year California Chrome) for more than 40 years, presently has a female goat in his barn called Miss Theresa, named for one of his former exercise riders. Got her as a baby for $100 in 2011 and she’s been a barn regular since.

“I’ve always believed in goats for nervous horses,” Sherman says. “Especially fillies. You get one that’s skittish and you team them up with a goat, next thing you know everyone is happy.”

Though a fair share of trainers use goats (a current estimate by the track’s Stable Office personnel is that somewhere between 25 to 40% of the trainers on the grounds have goats), some don’t. Veteran conditioner Bruce Headley, who for decades broke his own horses, said he never had problems with nervous horses, therefore he never needed goats. But he did recall a time when he had hens at the barn.

“They used to get up on the horses’ backs and scratch them. The horses liked it.”

Those who know the iconoclastic Headley would surely understand.

And, of course, to each his own.