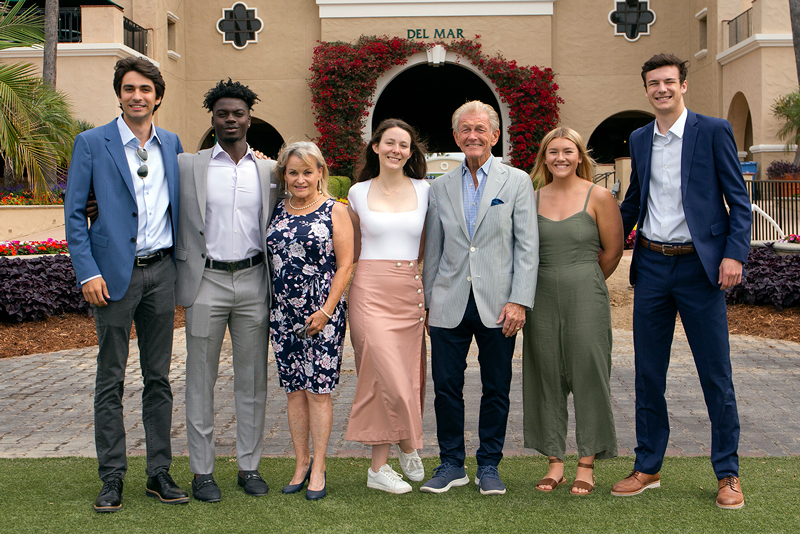 Whenever you hear discussions about improving the horse racing industry someone will inevitably suggest the need to introduce more young people to the sport. Most of the time it’s in reference to making fans out the younger generations but there is also the need to bring them into the day-to-day operation of horse racing itself. Del Mar does its part every year with an intern program designed to give aspiring young adults a leg-up in the business. This year, the popular program has five bright, enthusiastic individuals.

20-year-old Ben Atkinson of Scottsdale, AZ is a student at the University of Arizona and is the 41st Del Mar intern to hail from the school’s renowned Race Track Industry Program.

“I’m feeling ecstatic,” he say. “I’ve been coming to Del Mar since I was a kid and hearing about the opportunity to intern here and learn from the major people here, I’ve been looking forward to it.”

The head of the department at U of A, Robert Hartman, approached him and asked where he would like to intern. Atkinson told him he’s been coming to Del Mar for a while and “that would be a super fun place to work at.” So phone calls were made and the next thing he knew he was accepted into the program.

Like his fellow interns, Atkinson will be shadowing different department heads through their daily routines, be it checking out the jocks room one day, the pari-mutual room the next, and even spending some time with the stewards.

But the department he is most excited about working in is the racing office with racing Secretary David Jerkens.

“He has a very successful career,” Atkinson says, “and (I admire) what he’s done to keep the great relationships with the horsemen and to fill entries.”

Ben’s been hooked on horse racing for years. A standout moment for him came watching the great mare Zenyatta in action. His dream job is to one day work at Del Mar. “I know I’m probably going to have to work somewhere else to get the experience,” he says, “but I hope to build great relations and one day get a job here.”

Sports have been a part of Brigitte Becko’s life for much of her 22 years. Her Mother, Jo Beckeaux, worked for several broadcast sports agencies while Bridget was growing up, affording the youngster opportunities even the most die-hard sports fans never get to experience. She spent many a day behind-the-scenes at several sports outlets, including Fox Sports.

“I’ve always been around broadcasting,” Becko says, “the trucks, the cameras, and the talent and how it all works and I’ve always loved it. It’s always made sense to me.”

When her Mother began working at TVG, it exposed her to horse racing for the first time. That led to an opportunity to work at last fall’s Breeders’ Cup at Del Mar.

“I got to see how amazing of a culture and game it really was and I loved it,” she says. “There is so much going on here from the owners to the trainers to the horses to the bettors to the people and the customers.”

The University of Santa Cruz student did such a good job she was asked if she’d like to participate in this year’s Intern Program.

On Opening Day at Del Mar, Bridget helped out with the Grand Experience in the Del Mar Turf Club. A mixologist from Patron poured $1,000 margaritas, with the proceeds going to the California Retirement Management Account.

She says the drink was a little too stiff for her account.

R.J Faltinsky will celebrate another birthday – his 21st -- at Del Mar, something he has done for the past three summers. But this year will be different. He’ll be working as an intern at the place he has made a summer hangout for years.

“My friend and I would come here very frequently…a few times a week,” he says. “When I got accepted (into the Intern Program) it was like a dream. I get to be here every single day; like, I ‘have’ to be here every day, which is awesome.”

Born in Connecticut but raised in San Diego, Faltinsky graduated from La Jolla High School and is now going to school at USC where he’s a business major.

Growing up in San Diego meant spending many a summer’s day playing the horses. Initially, he came out to Del Mar with his Dad and other family members, then later with his buddies.

“One of the first times I went here I placed a bet on a 30-1 shot,” Faltinsky remembers, “and it won and from there I was hooked.”

He found out about Del Mar’s internship from Del Mar’s feature written about last year’s group in the program.

“Being on the spectator side for such a long time I’ve always been curious about what goes on on the inside,” he says. “The whole wagering and betting side is very interesting to me. How the odds are calculated, the payouts on Exactas and Trifectas…so I hope to get a greater insight on how horse racing works as a business.”

He says he’s hoping to meet some of the main players at Del Mar, such as track CEO Joe Harper.

“Mr. Harper has been here for quite a while and he’s done such a great job with it,” he notes. “That would definitely be awesome to get some insight and advice from him.”

Brooke Promes also will celebrate her 21st birthday at Del Mar this year. A native of Dublin, CA, she got her first exposure to horse racing at an early age when the family went to the Alameda County Fair up in Pleasanton in Northern California. But despite being enrolled at San Diego State where she’s majoring in business marketing, Brook admits she has never been to the races here at Del Mar.

“It’s a whole new experience for me,” she says, “and I’m really excited for it. It’s really fun for me to learn something completely new.”

She said she landed the internship at Del Mar in a roundabout way.

“My dad worked at Bay Meadows and happened to know somebody at Churchill Downs who knew somebody here,” she explains. “The internship came about and I hopped on it because I thought it was a great opportunity.”

She got hooked on racing while with her dad at the Fair.

“We were betting a lot and we kept winning,” she says. “We won four races in a row. That was the time that I thought, ‘this is a lot of fun.’ I just loved the energy and I loved how ‘niche’ it was. I’m really into sports and this is like such a great niche sport.”

Being her age she doesn’t have a firm plan yet on her career but she believes this summer at Del Mar could be pivotal.

“I love sports marketing,” she notes, “and I think me getting my experience in this internship is going to help me with that decision. I can already feel like it’s going to be a good experience so I can definitely see myself staying (in horse racing).”

Chris Lee has come a long way to get to Del Mar. A native of Orlando, FL, his family moved and he went to middle and high school in Kansas City. The 22-year old now attends college at the University of Arizona, as a business major.

But unlike his fellow Wildcat in the Del Mar program, Chris is not a part of the university’s Racing Track Industry Program. In fact, he admits he’s never been a fan of horse racing…until a friend of his at U of A introduced him to sport.

“Horse racing is something I really hadn’t gotten into yet,” he says, “but it caught my eye. I didn’t realize it was such a big community. I got here and it was like ‘Wow’ this is like a big family, everyone knows each other. I need to figure out a way to try to get into this.”

He hopes to learn more about the business aspect of horse racing as well as the connection with the media.

“One thing I noticed,” he says, “while walking around here is there are TV’s literally everywhere in the whole building, so media has to be big here.”

Like his fellow interns, Chris has been looking forward all summer to getting to Del Mar. He even went to Nordstrom and purchased some Kentucky Derby socks, which he wore to his interview. “If this doesn’t show I’ve been looking forward to this for some time now,” he says, “I don’t know what does.”