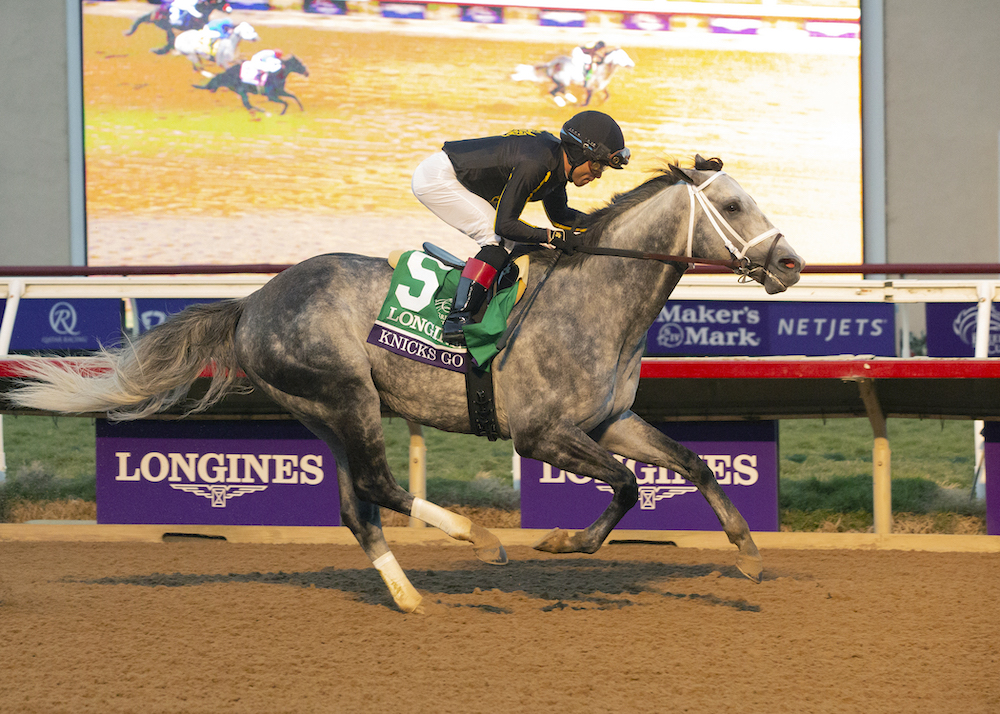 Korea Racing Authority’s Knicks Go ($8.40) played catch me if you can in the 38th running of the $6 million Longines Breeders’ Cup Classic (G1) for 3-year-olds and up, and no one could as he posted a 2 ¾-length victory over Medina Spirit to conclude the Breeders’ Cup World Championships races Saturday afternoon at Del Mar.

Trained by Brad Cox and ridden by Joel Rosario, Knicks Go covered the 1 ¼ miles on a fast main track in 1:59.57. The victory is the first in the Classic for Cox and eighth overall while Rosario picked up his 15th World Championships victory and second in the Classic. He won the 2018 running with Accelerate at Churchill Downs.

In becoming the sixth horse to win two different Breeders’ Cup races, Knicks Go set off on an uncontested lead through fractions of :23.16, :45.77 and 1:10.04 with Art Collector in closest pursuit early with Medina Spirit and Hot Rod Charlie tracking in third and fourth.

On the far turn, Art Collector backed out of the picture as Medina Spirit tried to mount a rally to the outside of Knicks Go and Hot Rod Charlie cut the corner on the inside. The threats were short-lived as Knicks Go scampered clear to add the Classic to his victory in the Big Ass Fans Dirt Mile (G1) last year at Keeneland.

Trainer Brad Cox (Knicks Go, first and Essential Quality, third) – “He ran a tremendous race. Obviously, the race went really well. He broke, was able to establish position early. Once he was able to do that, he’s a hard horse to catch. I’m very proud of him.”

(Nobody went with him): “He’s very fast. It was a big race today. I think the final time was good, too.

Essential Quality: “It looked like he was down on the inside. He stayed on. He ran well . I’m hopeful that is worthy of a championship honor for him. He’s been running all year. I thought he was the leader in the clubhouse and hopefully that was enough to get him a 3yo Eclipse Championship.

Winning jockey Joel Rosario (Knicks Go) – “We had a beautiful trip. He does exactly what he wants to do. I tried to save as much as I could, because we had a mile and one quarter to go. But he was going easy. At the quarter pole he just took off again. He’s just an amazing horse.”

Trainer Bob Baffert (Medina Spirit, second) – “John said he broke just a step slow, so he couldn’t be laying there where Mike (Smith) was, a little bit closer. I’m very proud of him. He ran a great race. The winner was just too much. I’m proud of the fact that he showed today that he beat those 3-year-olds. To me, he’s the best 3-year-old. He showed it today. That’s what racing is all about, proving it on the racetrack. And he proved it today that he’s the real deal.”

Jockey John Velazquez (Medina Spirit, second) – “I broke slow and by the wire the first time I had to take a little hold of him. I gave him his head around the first turn and around the second turn he came running and kept running. Who’s the best 3-year-old now?”

Jockey Luis Saez (Essential Quality, third) – “I wasn’t expecting the pace to be that slow. Everything was a mess. I thought there was going to be a lot of pace, but the plan was to wait, sit still and make one move but the pace was so slow, we couldn’t do anything.”

Jockey Flavien Prat (Hot Rod Charlie, fourth) – “I was in a good spot, able to save ground, and he ran his race. He made a move but they were just better than us today.”

Trainer Ed Moger Jr. (Stilleto Boy, fifth) – “He ran hard. There were four really good horses in front of him. He probably could have had a little bit better trip, but Kent (Desormeaux) rode the horse great. He did exactly what we said, we wanted to lay off the pace and let the speed go. He probably wasn’t good enough. We’re happy. Happy to be here.”

Jockey Kent Desormeaux (Stilleto Boy, fifth) – “I couldn’t have dreamt of a better race situation for the horse, he really carried me very well. And these are some very good horses.”

Trainer Bill Mott (Art Collector, sixth) – “It’s hard to deny the winner. We put the pressure on him. We were close. Johnny (Velazquez on Medina Spirit) wound up being second. I don’t have any excuses right now other than we went pretty fast early, but we were trying to win the race.”

Jockey Mike Smith (Art Collector, sixth) – “He broke well and we were tracking right behind (Knicks Go). On the backstretch, he started running with his head up, then just came up empty.”

Jockey Victor Espinoza (Tripoli, seventh) – “There’s not much to say. We were able to save ground, but couldn’t keep up.”

Jockey Ricardo Santana Jr. (Max Player, eighth) – “I don’t know what to say. I don’t know if it was the track but he didn’t fire today.”