Officials Are Named for 2020 Summer Race Meet at Del Mar 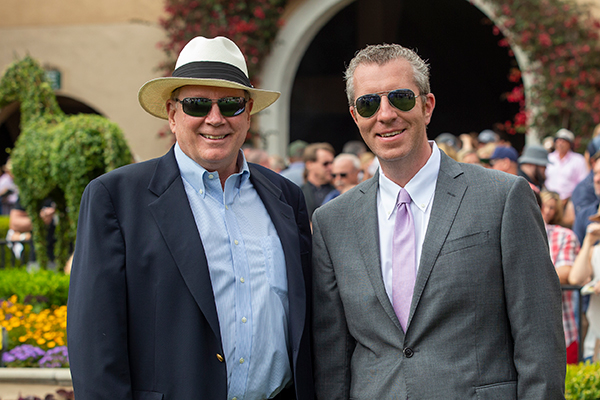 As they have for the past seven years, Tom Robbins and David Jerkens will combine to run the show as the heads of the seaside track’s racing department.

Robbins, a member of one of California’s great racing families, will be starting his 40th year at Del Mar as he heads up a crew of more than 80 racing department staff in his role as the track’s executive vice president, racing and industry relations.  Jerkens, who also hails from a great racing clan – his an east coast-based one that was headed by his late grandfather, the Hall of Fame conditioner H. Allen Jerkens -- has made his mark in the west and will be heading up the track’s racing office as its racing secretary for the seventh straight summer.

Others signed on for the 28-day, nine-week run through the summer will be assistant racing secretary Zachary Soto, returning for his 30th summer at Del Mar, and racing veteran Ed Reese, serving as the track’s stakes coordinator for the third time. Joining them this year will be the track’s new Racing Coordinator, Tora Yamaguchi, who worked in the department previously but now is coming off a stint as the jockey’s agent for rider Rafael Bejarano.

Other key personnel in the unit include stable superintendent Jackie Lynn, jockey room clerk of scales Matt Nichols and his assistant, Charles McCaul, as well as clerk of the course Dawn Schmid.

In the stewards’ stand will be the trio of Kim Sawyer (in her 12th season at Del Mar), Grant Baker (in his seventh) and Luis Jauregui, who has served as either a regular steward or a safety steward locally every year since 2009. Joining them as this summer’s safety steward will be Ron Church, who performed the same job at Del Mar last fall.

Del Mar’s placing judges will be Robert Moreno, Sue Brent and Reese doing double duty. Additionally, Heather Correa will serve as a patrol judge along with Brent, while Karen Denovel will work as both a paddock and patrol judge.

Following a safety measure the track put in place last year, two of the veterinarians again will be assigned to elevated observation stations in the mornings to oversee workouts and gallops on the racing surfaces. Should one of the veterinarians see something untoward with a horse, they have the capacity to have the animal removed from the track and examined for possible injuries or negative conditions.

Other noteworthy officials for the session – which will have racing on a Friday-through-Sunday basis each week and finish on Labor Day Monday, September 7 – include Bridget Crawford, paymaster of purses; Jennifer Paige, horse identifier; John Lies, morning line maker and officer timer, and Victor Tovar, horseshoe identifier.

Leif Dickinson is back for his 21st year as Del Mar’s turf and landscape superintendent, while main track guru Dennis Moore returns for his fourth summer as director of track maintenance.

Yet another returnee for the meeting is veteran head starter Jay Slender, spending his seventh year at the shore.

First post throughout the stand will be at 2 p.m.