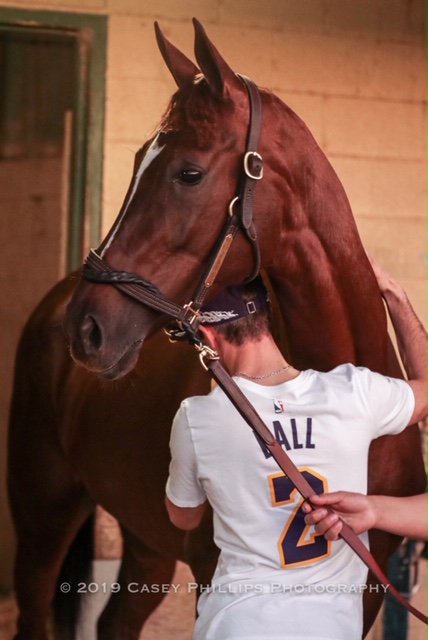 Flavien Prat and Vasilika share a final time together

Flavien Prat had answered the questions and provided comments on his victory aboard Toinette in the Goldikova Stakes on Sunday, November 3, closing day of the Santa Anita fall meeting, when another item of business was brought up.

He was asked for his thoughts on the retirement of Vasilika, the 5-year-old mare that Prat had guided to eight graded stakes victories in the 21 months after she was claimed for $40,000 by Hall of Fame trainer Jerry Hollendorfer. Prat was asked to reflect on the Kentucky-bred daughter of Skipshot who he had ridden, one day earlier, to a runner-up finish in the $2 million Breeders’ Cup Filly & Mare Turf, losing by only a neck but ending her career with more than $1.8 million in earnings.

“Yesterday was the last time I rode Vasilika (but) I was so busy that I didn’t realize until I went to the jocks’ room that it would be the last time,” Prat said. “I wanted to see her before she leaves.”

And so he did. Without delay.

First, Prat made a phone call to make sure that Vasilika – scheduled to leave that evening - was still in her stall at Los Alamitos and hadn’t already departed for Kentucky where she would sell, a day later, for $1.5 million as a broodmare prospect. Then the 27-year-old Frenchman, along with his wife and infant daughter, drove the 32 miles in the heavy-duty Los Angeles area traffic from Arcadia to Los Alamitos to say goodbye to an equine “amie.” 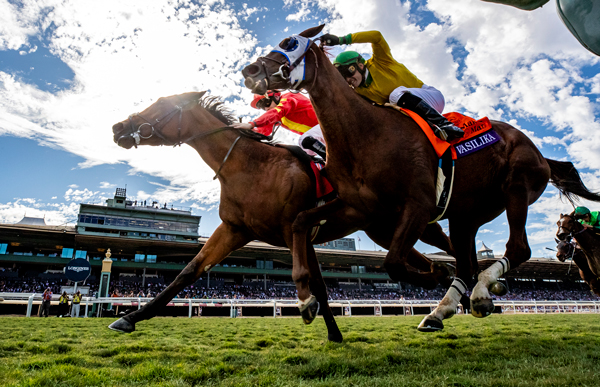 Prat was aboard Vasilika for 16 of her final 17 starts in a 36-race career, missing only the Yellow Ribbon at Del Mar on August 3 due to an out-of-town commitment, before returning to win the John C. Mabee on her at the shore oval on August 31.

“She taught me a lot,” Prat, back at Del Mar for the Bing Crosby meeting, said recently. “She just loved to run. She was such a great mare. She gave a lot to me, she was special, and I thought it was right to see her one last time.

“I gave her some pats and hugs and fed her some carrots.” 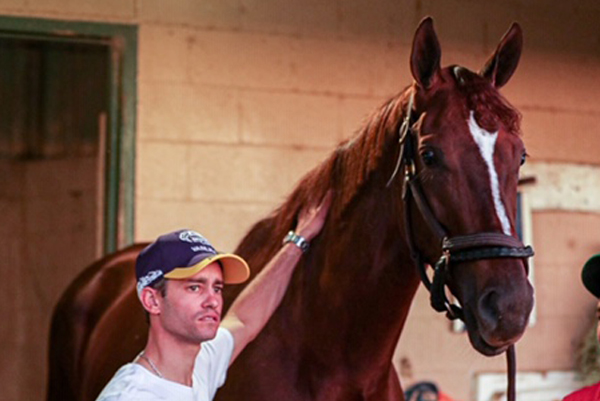 It was a sentimental end to a weekend – the two-day $30 million Breeders’ Cup championships – that was both busy and successful for Prat.

Over two days, he rode all 14 of the $1-$6 million races. He scored a win aboard 45-1 shot Storm the Court in the $2 million Juvenile and had eight additional in-the-money finishes. Only one of his mounts was a morning line favorite, most were listed at double-figure odds in the initial assessment.

Even Prat, known for modesty and unsparing self-assessment of rides in his three years on the Southern California circuit, came away pleased with the effort. But could he be said to be “in the zone,” a term ascribed to athletes when they deliver superb performances?

“Of course at the Breeders’ Cup you try to do the best that you can,” Prat said. “But I was just going back-to-back, race-to-race. I couldn’t really think if I was in any kind of zone. I was just trying to get the best out of each one.”

“I thought he was the best rider out there if you look at his results based on the odds of his horses. He had 14 mounts, one win at 45-1, four seconds and four thirds. One of his seconds was on a 51-1 shot and if you look at his thirds, they were all double-digit odds horses.

“He didn’t win the Bill Shoemaker Award (as Breeders’ Cup’s top rider) because Irad Ortiz, Jr. won three. But I thought Prat rode as well or better than anybody. He put on a clinic out there.

“Every horse he rode was in a perfect spot. He had a couple photos that didn’t go his way, but he is well on his way to being, in my opinion, one of the top five riders in the country.”

Ike is not the only one recognizing Prat’s abilities. There is a growing consensus in Southern California that he’s become the king of the hill in the local jockey rooms. His series of riding titles – including three at Del Mar – feeds that narrative, as does his current ranking as fifth-leading rider in America with 158 wins from 677 mounts and yearly earnings of $18,936,525.  His win percentage – 23% – and his in-the-money percentage – 58% – are the highest of any of the nation’s top 10 riders.

When he first came stateside from his native France, nurtured initially by trainers Leonard Powell and Richard Mandella, the thought was he was a pretty good turf rider. That thought has expanded now with the realization that he can beat you short or long, grass or dirt. Simply, he’s a factor – and a very strong one – every time he gets a leg up on a horse.