What a Workout! Sunday Silence's Day in the Del Mar Sun 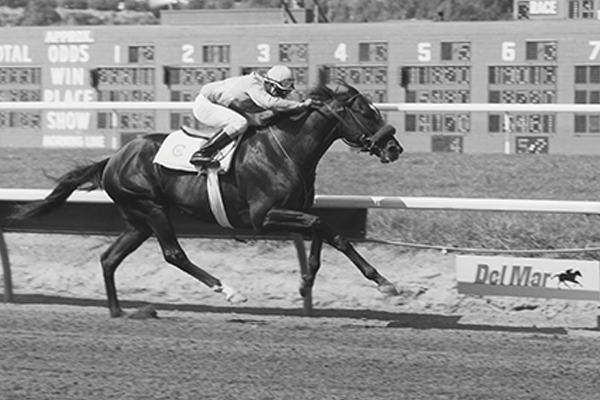 Thoroughbred workouts can be gold, or fool’s gold.

Gold when they prove to be an indicator of readiness for a racing victory. Fool’s gold when a series of “bullets” in the morning inexplicably leads to a dud of a performance in the afternoon. It’s no wonder that some handicappers swear by the little line of statistics at the bottom of the past performance sheets and others swear at them.

Del Mar’s crew of clockers headed by John Malone have timed, by unofficial count, more than 6,000 workouts during the summer meeting, which started July 17 and ends on Labor Day. How many workouts there have been in the 80 seasons of racing at the track is a question only the most obsessive of mathematicians would be inclined to attempt to answer.

But there is no question that one of the most golden workouts in track history, one which provided a golden moment worth treasuring, occurred 30 years ago. On September 9, 1989, Sunday Silence – the reigning Kentucky Derby and Preakness champion – worked a mile between races in a stunning 1:33 1/5, equaling the track record, which still stands, set by Precisionist on August 1, 1988.

Three of the principals in that artful work are no longer alive. Legendary trainer Charlie Whittingham died, at the age of 86, in 1999, three years after the passing of his top assistant at the time, Rodney Rash, who was 36. Sunday Silence died in 2002, having spent the final 11 of his 16 years in Japan where he became that country’s top sire and literally gave an infusion of new blood into the Japanese breeding industry.

There is, however, one person who was an integral part of the workout who remembers it in vivid detail and eagerly talks about it. So, let former jockey Patrick Valenzuela take it from here.

“Charlie told me earlier in the week that they were wanting to have him work out between races. They were wanting to showcase him because he’d never run at Del Mar. (He had beaten eastern star Easy Goer in the Kentucky Derby and Preakness) but he was coming off a pair of seconds (to Easy Goer) in the Belmont and (to Prized) in the Swaps. We knew he was the best horse in the country and Charlie said he wanted to get a really good work into him because he was going to the Super Derby (a $1 million race at the time).

“He said, ‘I want you to squeeze the lemon, but don’t squeeze it dry.’ I said ‘Senor Carlos,’ which is what I used to call him, ‘I’ll do whatever you want.’”

It was a typically nice day at Del Mar, maybe a touch warmer than usual, for the afternoon display.

“He probably carried about in the range of 135 pounds,” Valenzuela said. “It wasn’t a jockey saddle, it was an exercise saddle. Charlie put a heavy pad on him, plus the saddle cloth and morning girth.

“I remember them taking him around the ring in the paddock and everyone was ‘ooing’ and ‘aahing.’ Mr. (Joe) Harper wanted to bring a crowd in and that’s what he did. Here’s this beautiful Kentucky Derby winner and they’re remembering the performances he had put on earlier in the year.”

Whittingham repeated the instructions he had given earlier in the week. Rash gave Valenzuela a leg up on the big black horse, saying “Take care of him.”

They “backtracked,” going opposite the direction of races, once around as Valenzuela recalled. Then swung down toward the rail near the finish line, going in the right direction, and Sunday Silence started to move with a purpose.

“It started out at what was just a high gallop for him,” Valenzuela said. “Probably 24 seconds for the first quarter. Then as we turned onto the backside I could feel him getting into it.”

It’s at this point while telling the story that Valenzuela, now 56, springs from his seat in the sixth-floor press lounge and gets into a rider’s crouch, hands forward holding invisible reins, obviously reliving the moment in his mind 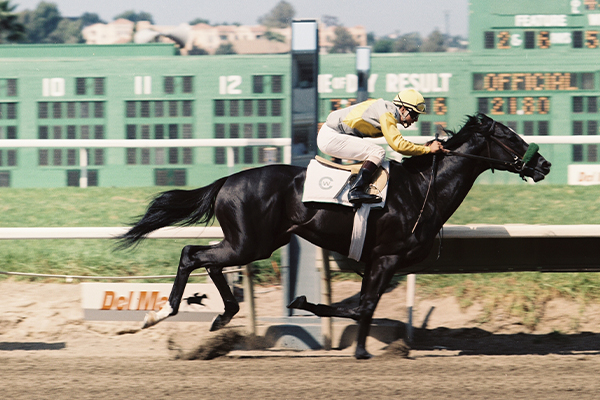 Sunday Silence’s workout time of 1:33 1/5 for the mile tied the track record.

“There’s nobody there but us. I could feel the wind coming off the ocean in my face. I could hear Sunday Silence breathing …thut…thut…thut….and the hooves going tuttle ut …tuttle ut … tuttle ut.

“At the three-eighths pole I picked him up and started to ask a little bit. At the head of the lane I threw a cross, chirped to him and started pumping a little bit. Down the lane he switched to that right lead and started reaching out and it seemed every jump he got faster and faster. We crossed the finish line, I looked up and saw 1:33 and one and I could not believe it. I was in shock.

“He did it effortlessly. It didn’t seem that fast. But the track was fast that day, it was a nice day and he just loved it. I rode a lot of really good horses, but Sunday Silence was by far the best. He was so athletic and the things he did were unbelievable.”

The first to greet them on the return to the grandstand area was Rash.

“Rodney said ‘What are you doing? You went too fast,” Valenzuela recalled.

“I said ‘Senor Carlos said to let him run, and that’s what I did,’’’ Valenzuela replied.

Rash and a groom led the horse away as Whittingham approached.

Fifteen days later Sunday Silence went to the lead at the half mile mark, steadily drew away and crossed under the wire at Louisiana Downs a six-length victor in the 1 ¼-mile Super Derby. He followed it up with a third triumph over Easy Goer, this time in the Breeders’ Cup Classic at Gulfstream Park, which earned him the title Horse of the Year.

And, all these years later, folks at Del Mar can still recall a white-hot workout that turned to gold.