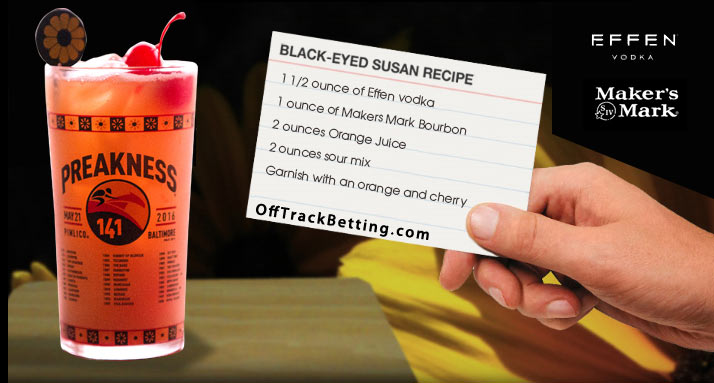 OffTrackBetting.com - Pimlico Race Course in Baltimore, Maryland will play host to the Grade 2 Black-Eyed Susan Stakes on Friday, May 20. Three year old fillies will be featured when they take to Pimlico's dirt track and race 1 1/8 miles.

A full field of 14 have been conformed for the Black-Eyed Susan Stakes - race 11 on Pimlico's Friday card. Post time is 4:50 PM. Let's take a peek into the past performances of all 14 combatants for this intriguing Grade 2 stakes.

Go Maggie Go 5-2 - lightly raced Dale Romans trained filly makes just her fourth career having posted two wins so far. Her first race produced and impressive2 1/4 length win at Gulfstream March 13 and her second was a nice upset score in the Grade 2 Gulfstream Park Oaks April 2. Last time out was a slightly disappointing, troubled fourth in the Grade 1 Kentucky Oaks May 6. Go Maggie Go looked had been very good in limited action before a slight stumble last time out and hopes to bounce back from post 5. Luis Saez gets the call.

She's a Warrior 6-1 - has yet to post a win in her six career starts but has three seconds and three third place finishes. Last time out was a third behind Songbird in the Grade 3 Santa Anita Oaks at Santa Anita April 9 which followed a second in a MSW March 5 and another third behind Songbird in the Grade 2 Las Virgenes Stakes February 6. She's a Warrior has been in every race so far and could be in line for her first ever win this Friday. Gary Stevens has been tabbed to ride from gate 6.

Kinsey Kisses 6-1 - will race for just the fourth time for trainer Todd Pletcher having posted two wins and a third place finish so far. Last time out was a respectable third in her graded stakes debut - the Grade 3 Beaumont Stakes at Keeneland April 17 which followed an Allowance Optional Claiming score at Tampa Bay March 13 and a maiden score at first asking in January. John Velazquez will try to guide her to his first stakes score in her first race beyond seven furlongs - from gate 10 Friday.

Dothraki Queen 15-1 - Kenneth McPeek trained filly placed in her first five career starts - two wins, a second and two third place finishes. She enters off an ugly eighth however in the Grade 3 Appalachian Stakes at Keeneland April 14. She won the Grade 2 Pocahontas Stakes at Churchill Downs in September and went on to a couple of good results - a second in the Grade 1 Darley Alcibiades Stakes in October and a third in the Breeders' Cup Juvenile Fillies. Two starts back was another decent result - a third in the Grade 2 Golden Rod Stakes November 28. Dothraki Queen has been decent so far and will be looking for a strong bounce with Julien Leparoux in the saddle from gate 2.

Midnight On Oconee 15-1 - has seven career starts for trainer Larry Jones with two wins and three second place finishes. She enters off a seventh after setting the p[ace and tiring in the Grade 2 Fair Grounds Oaks March 26 which followed a pair of respectable runner-up finishes - the Grade 2 Rachel Alexandra Stakes February 20 and the minor Silverbulletday Stakes January 16. Midnight On Oconee has been OK and chases her first stakes win from post 9 Friday. Gabriel Saez has been scheduled to ride.

Cced 15-1 - has two wins and a second place finish in four career starts for trainer Steve Asmussen. She makes her stakes debut Friday off an Allowance Optional Claiming score at Oaklawn Park April 14, a sixth in a similar race on that track March 11 and a maiden score at Fair Grounds in February. Cced takes a huge step up in competition in so-so form and departs from post 13 with Florent Geroux guiding her.

Mom's On Strike 15-1 - will hit the track for the third time for trainer Joe Sharp after two career starts produced a win and a third place finish. She finally broke maiden last time out at Oaklawn Park April 16 after a third in her debut March 17 at Fair Grounds. Mom's On Strike steps up in decent form and will have Joe Rocco in the reins from the outside gate 14.

A P Majestic 30-1 - Michael Trombetta trained filly has two wins, two seconds and a third place finish in seven career starts. She makes her graded stakes debut off a good win in her stakes debut - the minor $100,000 Weber City Miss Stakes at Laurel Park April 9 which followed off-the-board finishes in two Allowance races earlier this year. A P Majestic hadn't been all that impressive before last time out but hopes to build on a career-best effort from the rail Friday. Victor Carrasco rides.

In the Navy Now 30-1 - has a win, two seconds and a third place finish in seven career starts - all at Laurel Park. She makes her graded stakes debut Friday having placed in her last four starts. Last time out was a runner-up finish behind A P Majestic in the minor Weber City Miss Stakes April 9 which followed a third in the minor Caesar's Wish Stakes March 12 and a maiden score in January. In the Navy Now has been trending upward recently and could be a factor Saturday from post 11. Trevor McCarthy rides.

Ma Can Do It 30-1 - Dale Romans trained filly has yet to post a win in her six career starts but does have three runner-ups and a third place finish. Last time out was a second in a MSW at Keeneland April 23 after an eighth in another MSW at Oaklawn Park March 20, a fifth in the Breeders' Cup Juvenile Fillies and an OK third in the Grade 1 Darley Alcibiades in October. Ma Can Do It has placed in just one of her last four starts ahead of this weekend and looks as though she'll be in over her head in this one. Brian Joseph Hernandez has the mount from gate 4.

Downdraft 30-1 - has four career starts for trainer James Lawrence with a win and a third place finish. She makes her stakes debut Friday having finally broken maiden April 24 after a third in a similar race at Laurel Park March 20 and a pair of off-the-board finishes in her first two career starts. She takes a huge step up in competition in decent form. Angel Cruz has the mount from post 7.

Double Entendre 30-1 - makes just her third career start for trainer Peter Walder having posted one win so far. She finished fifth last time out in her stakes debut - the Grade 2 Gulfstream Park Oaks April 2 after a decent win at first asking February 29. Double Entendre looked out of place last time out and will have to produce a special effort to contend Friday. Jockey Scott Spieth will try to deliver that from gate 8.