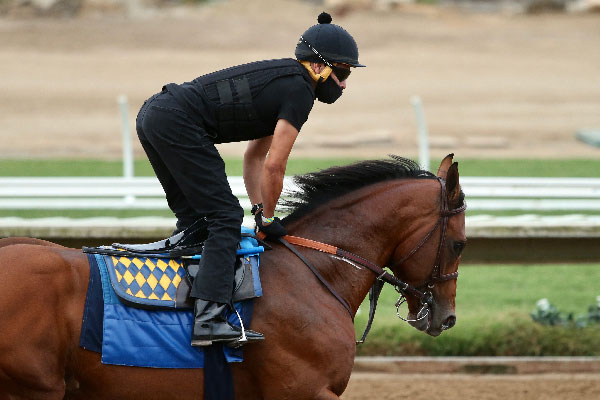 The Del Mar barber’s knowledge of Hall of Fame trainer Bob Baffert, whose distinctive white locks he was trimming, apparently did not extend to the horses in Baffert’s deeply talented stable.

So, asking about the best horses Baffert had on hand for the Del Mar summer meeting was a logical conversation starter or extender.

“Oh, I know THAT horse,” the barber exclaimed.

Maximum Security, the 4-year-old son of New Year’s Day who will make his first start for Baffert, and first in nearly five months, in Saturday’s $150,000 San Diego Handicap.

“He’s a very famous horse,” Baffert said in a phone interview earlier this week.  “I’m very excited and a little bit nervous for him to run. There’s a lot of pressure when you’re around really good horses and we always have that.”

Any trainer looks forward to a new horse in the stable and there are physical checks to be made upon arrival, which Maximum Security passed routinely. There was, however, one obstacle to overcome in the transition according to Baffert.

“Every trainer feeds a little differently and at first he was kind of a finicky eater when we got him,” Baffert said. “Which was strange, because he doesn’t look like he ever missed a meal in his life. But once we got that worked out, he has been fine.

“He’s very intelligent and around here he’s been kind of quiet.”

Maximum Security had two works at Del Mar, one more than was originally planned after the race was delayed a week by COVID-19 positives in the jockey colony.

“He’s a big, strong horse and I can’t be happier with the way he’s training,” Baffert said. “He trains like a really good horse.”

Maximum Security will be ridden for the first time by Del Mar-based Abel Cedillo. Luis Saez, aboard for the last seven starts, tested positive for COVID-19 two weeks ago at Keeneland and is subject to travel restrictions.

“When I got the word on Saez, I asked around about who was open.” Baffert related. “Some (jockey agents) said, ‘If it’s Maximum Security, maybe I could get open.’ But I really didn’t want to take anyone’s rider.”

Trainer Mark Glatt had nominated the multiple-stakes winning 6-year-old gelding Sharp Samurai, a turf specialist, to both the San Diego on dirt and the Eddie Read Stakes the following day on grass. The obvious strategy: provide opportunity for Grade II honors on either surface and a way of avoiding Maximum Security.

“Bob thought that because Abel and Luis Saez have similar styles Abel would be a good fit and was his first choice,” Cedillo’s agent, Tom Knust, said. “I thought that was very complimentary of both Abel and Bob.

“We ride a lot for Mark Glatt and Sharp Samurai’s owners (Red Baron Barn and Rancho Temescal). We told them we would hold the mount if they wanted to run in the San Diego. They were nice enough to say they didn’t want Abel to miss having the opportunity to ride ‘Maximum’.”

With Maximum Security committed to the San Diego, Cedillo – most recently aboard Sharp Samurai in a third-place effort in the American Stakes at Santa Anita on June 21 – was free to take the call from Baffert. Once, that is, Baffert got clearance from owner/breeders Gary and Mary West of Rancho Santa Fe and their partners.

“(Cedillo) is strong and aggressive,” Baffert said. “He won on Fighting Mad for Gary and Mary West, he’s won other races for me and he seems like he can handle the pressure. I’m happy to have him.”

The victory by Cedillo for the West stable was in the Grade II $200,000 Santa Maria Stakes at Santa Anita on May 31. 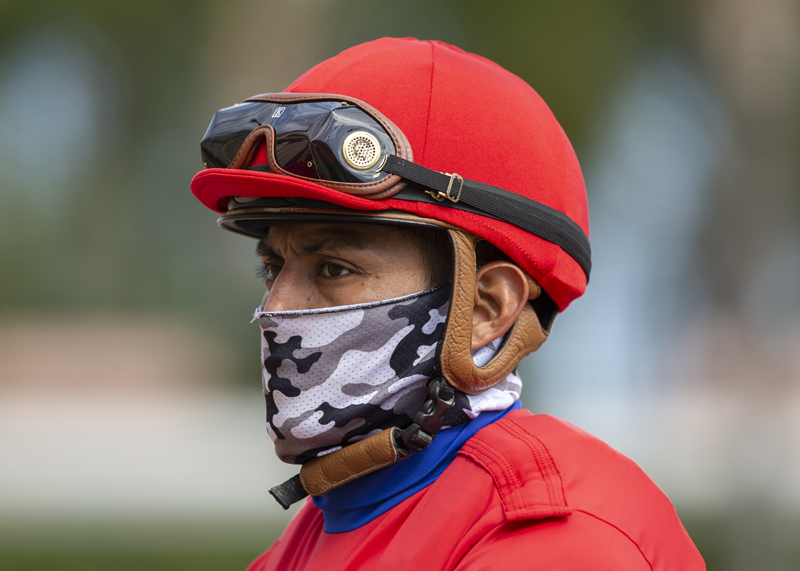 Cedillo, a 31-year-old native of Guatemala, was a dominant presence in Northern California before making a successful transition to the Southern California circuit a year ago. He’s been doing the due diligence for what could be career-boosting opportunity.

“I was very excited when (Knust) said I have a chance to ride this horse,” Cedillo said. “Right now, I’m watching the replays of all his races. It looks to me like I’ll have to kind of stay busy on him, but I’m going to try to talk to Luis Saez in the next few days and, of course, I’ll talk to Mr. Baffert and see what they say.”

Under normal circumstances, Cedillo’s assignment would be a one-race replacement for the proven Saez. But these are not normal times, with COVID-19 protocols curtailing jockey travel. And, Baffert said, Maximum Security is staying put for the summer.

“It’s a challenge. We’ve got this great horse and we’ve got this race as a prep for the (TVG) Pacific Classic,” Baffert said. Del Mar’s signature race, the Grade I, $500,000 mile and a quarter is scheduled for Saturday, August 22.

Back when Quarter Horse racing was the name of Baffert’s game, he had a good one named Gold Coast Express transferred to his stable.

“The first time he ran for me, I was so excited when I gave (jockey) Danny Cardoza a leg up I almost threw him over the horse,” Baffert said. Gold Coast Express won eight races in a row and was the 1986 World Champion.

Unlike most Del Mar stakes races, especially the ones for juveniles, the San Diego has not been good to Baffert. He’s won it once (Fed Biz, 2014) and had a couple of seconds (Paynter, 2013, Dr. Dorr 2016). But there were a couple of nasty ones, too.

In 1998 he ran his Triple Crown star and champion Silver Charm in the San Diego at odds of 3-10. Alas, they had to send out the proverbial search party to find him at the end of that one. Then, even more uncomfortably, there was 2017.

Arrogate came into the San Diego as the No. 1 ranked Thoroughbred in world, having won the Breeders’ Cup Classic, Pegasus World Cup and Dubai World Cup. Arrogate went off at odds of 1-20 but was never much of a factor and finished fourth, beaten 15 lengths, by the John Sadler-trained Accelerate.

“The track can be tricky. Some horses like it and some don’t,” Baffert said. “Arrogate didn’t. But this horse has worked well on it and I think he likes this track.

“I have a really good feeling about this horse and I really want him to run well. What he’s gone through in his career is not his fault.”