<‐ Julie Krone, A Groundbreaking Female Rider, Is Scheduled to be Honored August 17 as 2019 Laffit Pinc
Margolis Wagers "Across The Board" To Win Del Mar Challenge ‐> 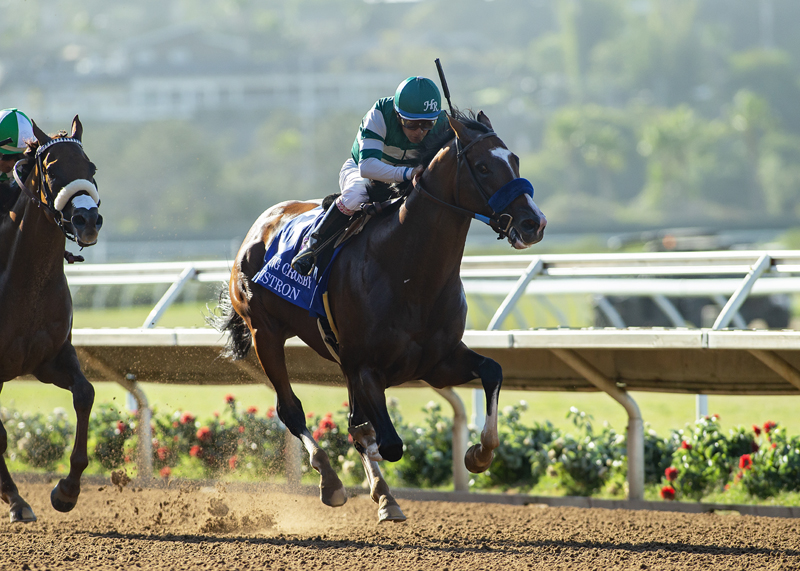 Hronis Racing’s Cistron, with Hall of Famer Victor Espinoza in the saddle, sped to the front from the gate and never looked back in winning the featured Grade I $300,000 Bing Crosby Stakes Saturday at Del Mar.

Sent postward at 9-2, Cistron was well-rated by Espinoza in the early stages of the six-furlong dash and had enough in reserve to resist the late challenge of Desert Law, winning by a half-length in 1:09.95, fastest at the distance this summer.

Jalen Journey was third, two and one-quarter lengths behind the runner-up and two and one-half lengths ahead of Air Strike in the field of seven sprinters. Eastern invader Recruiting Ready, the 8-5 favorite, wound up sixth under Flavien Prat who was seeking an unprecedented fifth straight success in the Crosby.  Scratched was Calexman.

With his victory,  Cistron qualified for a spot in the Breeders’ Cup Sprint in November at Santa Anita since the Bing Crosby is a “Win and You’re In” BC series event.

Desert Law, who was ridden by Rafael Bejarano, paid $6 and $4, while third-place Jalen Journey returned $4.20 to show.

In Saturday’s supporting feature, the $150,000 Real Good Deal Stakes for California-bred three-year-olds, well-backed Lieutenant Dan wore down 7-10 favored Cruel Intention in the stretch and drew off to score by three lengths.

Oliver closed resolutely to be second, overhauling Cruel Intention who faded after his early duel with the eventual winner, finishing a neck farther back in third.  Fourth in the field of five runners was Posterize. Prodigal Son was fifth and last.

Victory in the Real Good Deal was the fourth in eight starts for Lieutenant Dan and first money of $85,500 increased the Grazen gelding’s earnings to $304,020.

Van Dyke was the day’s riding star as he had a triple. He won the second aboard Moody Jim for a $9.40 payoff, the aforementioned Real Good Stakes on Lieutenant Dan and the seventh on Great Return at $7.80. Thus, he moved within five wins of leading rider Prat, 15-10. Prat was limited to a single score on Wrecking Crew at $2.80 in the day’s opener.

VICTOR ESPINOZA (Cistron, winner) – “We were comfortable up there. He was running well on the lead. I wanted to save something for the stretch and I was able to. I didn’t get a lot of pressure up front and that helped. At the finish I still had lots of horse. He’s an amazing horse.

(Espinoza reflected on his morning training accident and serious injury at Del Mar a year ago, just five days in front of this same race.)

“I was thinking about that today. Life is interesting, isn’t it? How things happen; how they unfold. One thing I learned early in my career, you don’t give up. You don’t ever give up. And when I win a race, I enjoy it so much. Each win is special.”

RAFAEL BEJARANO (Desert Law, second) – “He ran a beautiful race. He tried hard. You know, they worked him quick the other day, close to this race (bullet :47 1/5 on July 22). Maybe too fast too close. I wish I would have worked him.”

MIKE SMITH (Jalen Journey, third) – “He just got a little tired at the end. Right up until then, I thought I was on a winner.”

JOHN SADLER (Cistron, winner) – “The way we were drawn, we knew we’d have to go to the front. It looked like there was a lot of speed in the race, but we didn’t really have a choice to change our style. Once he got away and got in the clear he gets energy from that. He had a super work over this track, a bullet, and he showed up for the big race today. We’ve got so many moveable parts (versatile horses) I’m not sure what’s next, but if he runs again here it will be in the Pat O’Brien.”

(The time is the fastest six furlongs of the meet.)

The stakes win was the first of the meet, but fourth in the Bing Crosby for rider Espinoza. He now has 98 stakes wins at Del Mar, fourth highest of all riders.

The stakes win was the fourth of the meet and second (Christmas Boy 1999) in the Bing Crosby for trainer Sadler. He now has 71 stakes wins at Del Mar, fourth most of all trainers.

The winning owners are Kosta and Pete Hronis of Delano, CA.