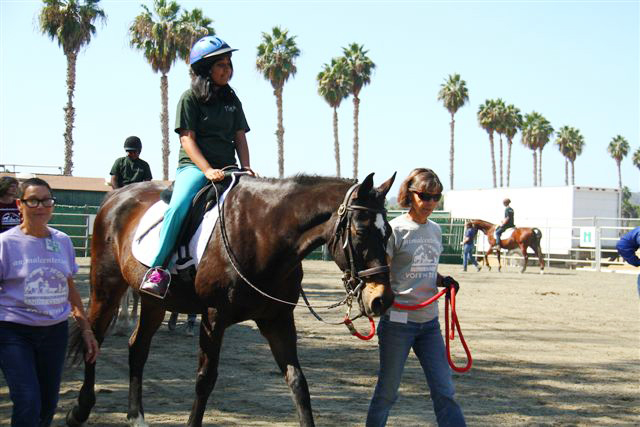 As it has for the past 80 summers – and now, too, for the past five falls – Del Mar takes pride in hosting a series of highly worthy charities and their causes during its race meetings. That will be true once more over the course of the upcoming sixth Bing Crosby Season between Friday, November 8 and Sunday, December 1.

The seaside track will jump right into its long-standing altruistic mode on Opening Day when it partners with its sponsor MyPoint Credit Union as they celebrate and support the kids of Camp Wamp, a place where disabled youngsters find positive experiences. The day’s first race, tagged the “CAN DO” after the Camp Wamp credo, will see five Camp Wamp kids escorting riders from the jockeys’ room to the paddock for mount up, then those same kids being on hand in the winner’s circle to present honors to the winning horse and rider after the race is run. Camp Wamp’s cause, its amazing founder and its heart-touching program can be viewed at https://stephenjwamplerfoundation.org

The following day, Saturday, November 9, Del Mar’s Il Palio restaurant will be the site of an annual Bet on Cures fundraiser for the Chron’s & Colitis Foundation, which seeks to aid in finding cures for the debilitating inflammatory bowel diseases that can play havoc with the digestive system and affect more than 3.1 million Americans. Along with an exciting day at the races at penthouse level, guests will enjoy private casino games, a live and silent auction, wine pull and the rewarding experience of coming together to support the Crohn’s & Colitis Foundation. Last year the gathering drew nearly 200 people and raised approximately $65,000 toward the cause. Tickets include delicious hors d’oeuvres with a hosted bar and can be obtained at BOC19.givesmart.com

On Saturday, November 23, the track will provide the backdrop for a fundraiser titled “A Day at the Races…Celebrating Women in Horseracing.” A pair of notable and highly successful Southern California owners and breeders – Marsha Naify and Samantha Siegel – will be spotlighted by the Don Diego Scholarship Foundation, which, since its inception in 1986, has raised more than $1-million for students either heading to college or seeking agriculture education grants. This year the event – featuring racing celebrities and food and drink in the sixth-floor Il Palio restaurant -- has a special Del Mar connection as it will kickstart the creation of the Joe Harper Scholarship, slated to be given annually to students who have an association with the racetrack. Harper, currently the track’s CEO, has been a Del Mar Thoroughbred Club executive and its leader for more than four decades. He and his wife Barbara have been longtime Del Mar residents and community activists for dozens of worthy causes in the area. Tickets for the affair can be obtained at www.dondiegoscholarship.org

Next on the roster of feel-good/do-good happenings is the popular “Toys for Tots” program on Sunday, November 24. San Diegans may recall this event being run by the Chargers football team until their departure at the start of 2017. Del Mar immediately picked up the ball, so to speak, and became the center point for its continuation and enhancement in San Diego that fall, collecting over 2,500 toys and more than $8,600 in donations for the “Toys” cause with special aid from the El Cajon Harley Owners Group. Delightfully, last year’s donations for the event more than doubled the first-year’s take. Again spearheaded by local Marine Corps units this year and joined by area motorcycle, hot rod and muscle car clubs who will conduct a colorful pre-race “ride” into Del Mar, the campaign figures to be even bigger and better for its third go-round. There once more will be lucrative opportunity drawings and a silent auction featuring major prizes during the racing afternoon as part of the day’s events. “Toys” bins will be available at the track throughout the race meet and anyone bringing an unwrapped toy for the cause will receive free admission to the track on the day they do. More “Toys” information seen here:  https://www.dmtc.com/calendar/detail/ride

The track’s special Thanksgiving Day (Thursday, November 28) program – with its early 11 a.m. first post – has a perfect charity component in its 8 a.m. “Family Fun Run,” which goes for a one-mile loop around the racetrack. Del Mar partners with the nearby Helen Woodward Animal Center and its unique therapeutic riding program for the high-energy morning exercise. Helen Woodward sets up several kid-friendly booths and brings adorable puppies that are up for adoption for a classic puppy race, while Del Mar in turn ensures a substantial fee from the fun run goes to the Animal Center’s riding program. Additional information on that program can be found here:  https://animalcenter.org/programs-services/therapeutic-riding

On Closing Day, Sunday, December 1, the track will salute the San Diego Food Bank and its mission of feeding families and individuals in need, which proves especially important during the holiday season. That afternoon Del Mar will host Food Bank staff and their big donors in a skyroom for the day and provide free admission to anyone donating a nonperishable food item. This year the track has expanded its food collection to not just the single day, but throughout the meet.  Food Bank bins will be available every racing day and those bringing a nonperishable food item will receive free admittance on the day they come. The “most needed” food items are canned meat, canned vegetables, canned fruit, canned soup, peanut butter, cereal and oatmeal. Also held on Closing Day is the Ladies and Gents program, which directly benefits the Susan G. Komen’s (Race for the Cure).The  Holiday at the Races event is a “pop-up festival” offering mini glam and mini spa treatments, wine tasting, a “famous mimosa bar” and lots of retail shops offering all sorts of gift ideas. The $10 fee for the session goes to the Komen group and their quest to stamp out breast cancer. More information about “Holiday” can be obtained at the following: https://www.eventbrite.com/e/ladies-and-gents-holiday-at-the-races-benefiting-susan-g-komen-tickets-72434500541

With the exception of Thanksgiving Day’s early first post, racing will start at 12:30 p.m. all afternoons during the fall stand.