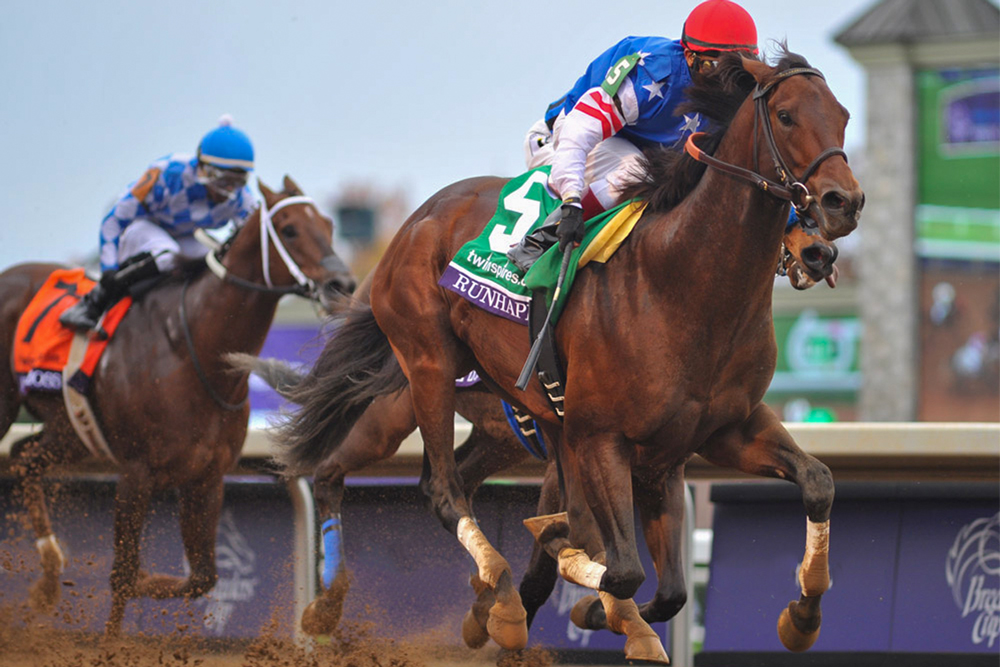 Del Mar Thoroughbred Club and Jim McIngvale, the owner of the former champion and now stallion Runhappy, have entered into a two-year agreement to showcase the horse to Del Mar horsemen and fans and bring about possible lucrative returns tied to his offspring.

Additionally, the horse’s name will be tied to the track’s unique Winners’ Bar and its third-floor location overlooking the paddock. That area will be totally revamped with new furniture and a fresh and focused look that will convert it into “Runhappy’s Winners’ Barn.” Also, there will be Runhappy hoofprints leading the way from the winner’s circle right up to the “barn” site, which is currently known as the winners’ walk.

Further still, there will be two interactive Runhappy “selfie” locations on the grounds where fans can take photos, or have photos taken, with one of the fastest horses to zoom onto the American racing scene in recent years. Del Mar’s daily salute to a branch of the military also will reference the horse in conjunction with the wishes of his owner, a huge backer of the American military.

“Del Mar is proud to partner with Jim McIngvale and Runhappy, who we believe might be one of the bright, young stallions in our country,” said Josh Rubinstein, Del Mar’s president and chief operating officer. “We especially appreciate his support of California racing.”

Runhappy was America’s Eclipse Award winning sprinter in 2015. He was a perfect seven-for-seven in sprint races during his career, including a smashing victory at Keeneland in the 2015 Breeders’ Cup Sprint. He entered the stud in 2017 at Claiborne Farm in Kentucky at a $25,000 fee.

His first crop of runners are currently yearlings and will come to the races in 2020, which is when the Del Mar/Runhappy partnership could take on extra value for local horsemen. McIngvale has generously agreed to enhance the winner’s share of any open maiden special weight race at Del Mar captured that summer by a son or daughter of Runhappy by $100,000.

”I know the horses run especially fast at Del Mar and that’s what my guy Runhappy is all about,” said McIngvale, known as “Mattress Mack” for his colorful on-air persona in promoting his Gallery Furniture stores in the Houston area. “I think you’ll see his babies running off the charts at Del Mar next summer and I am looking forward to rewarding those people who cash in on him early.”

Runhappy was bred to 127 mares in his first season at the stud.