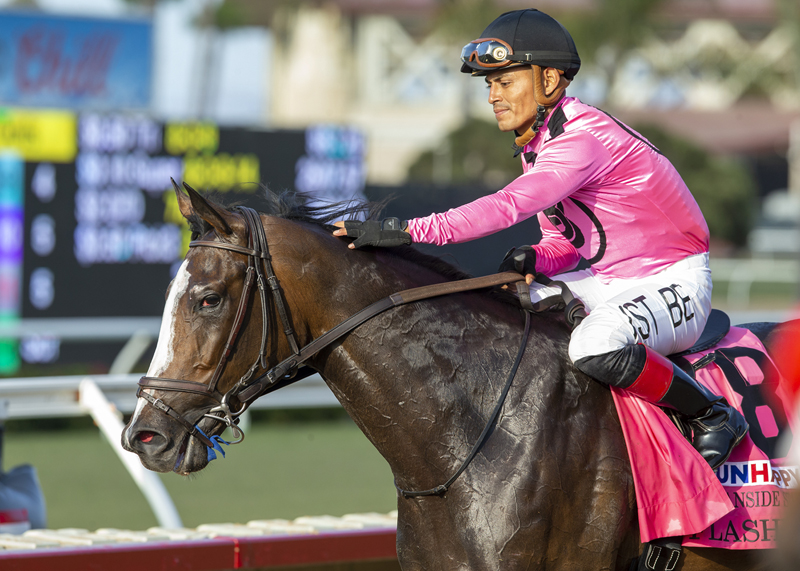 Wachtel Stable, Gary Barber and partners Flashiest won the afternoon’s feature, the $100,000 Runhappy Oceanside Stakes. He did so by a head with Abel Cedillo up and earned a winner’s share of $60,000.

The track’s opening card was conducted in gorgeous San Diego weather and saw 10 different trainers saddle the winners of its 10 different races. Cedillo and Victor Espinoza each won two races on the afternoon.

Racing returns to the seaside oval tomorrow with a first post at 2 p.m.

ABEL CEDILLO (Flashiest, winner ) – “I had a plan for him, but he didn’t break so well and so I didn’t push it. I just let him do his own thing and saved ground around the first turn. But when we went for the second turn, I said ‘This is it.’ I went wide with him and let him do his thing. He did it all. He was the winner.”

LEONARD POWELL (Flashiest, winner) – “I wasn’t happy being so wide, but this horse has always been a bad actor at the gate and never sends speed. And when you don’t have the speed you have to go wide to advance. I thought he was six or seven wide turning into the stretch, but he has a big, long stride reaching out. He was a very immature horse and he came in late to the barn, but he has been a good presence.”

This is the first win in the Runhappy Oceanside Stakes for rider Cedillo and his 11th Del Mar stakes win overall.

This is the first win in the Runhappy Oceanside Stakes for trainer Powell and his fourth win in a Del Mar stakes.

The winning owners are Wachtel Stable of Adam Wachtel of New York City, Gary Barber of Los Angeles, and their partners.