Gryder Chooses To End Worldwide Career at a Starting Point 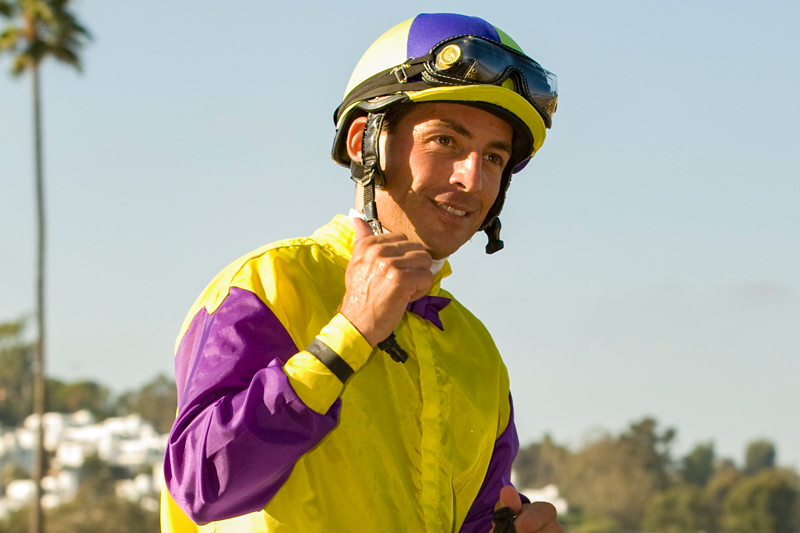 Aaron Gryder’s earliest memories of Del Mar are the times when his age was still in single digits, coming down from Los Angeles on the early Saturday morning train with his grandparents, Bill and Vern Gryder.

“We’d get off at the old station (across from what’s presently Jake’s and the Poseiden restaurants), check in at the Del Mar Hotel, ride boogey boards and then be at the track for first post,” Gryder said. “My grandparents loved to handicap and loved to play the horses, so early bird betting was a big thing on Sunday morning. There was always a big crowd and great energy for the races and I just loved it. Then we’d get back on the train Sunday night and head on home.

“It was great to be a kid and come down here and splash in the water, but splashing in the water wasn’t the reason I loved to come down here. I loved coming to the races and I think I knew I wanted to be a jockey from the time I was about four years old.”

On a list of tracks by order of number of races ridden by Gryder -- and his career mounts approach 30,000 – Del Mar is unlikely to make the top five. During times when the only live action here was seven weeks from July to September, Gryder was elsewhere for 19 years, 1988-2007. He took whatever he perceived as the best opportunity whether it was Chicago, the Midwest circuit from Kentucky to Arkansas and New Orleans or New York. He journeyed to Hong Kong and other foreign places to see what it was like there.

But if Del Mar isn’t No. 1 on his list, it’s the place he’s chosen for his last ride. Gryder has announced his retirement at the end of the current Bing Crosby meeting.

“I’ve been thinking about it the last couple months,” Gryder said. “Not many people walk away at the top of their game, and I’m not at the top of my game as far as my business right now. My passion’s still there, I feel great on horses, I know I can still ride. But if I can’t go out there and be competitive every day it doesn’t make sense to keep pushing and pushing until I push the envelope a little too far.

Born in West Covina, Gryder, who turned 50 in June, broke in at the Caliente track in Tijuana for a brief period, then moved up to Santa Anita as a 16-year-old. He started sharing a jockeys’ room occupied by many who were his idols growing up – Gary Stevens, Eddie Delahoussaye, Bill Shoemaker, Chris McCarron, Laffit Pincay, Jr. and others.

“The first or second week that I was riding in Southern California, I was talking to Stevens and Delahoussaye, who had been riding like 10 or 12 years at that time,” Gryder recalled. “I told them I hoped to be able to ride 10 or 12 years and I remember Eddie saying ‘Watch what you wish for – 10 years goes by quick.’

“I never thought much about it. Then 10 years goes by and 20 years go by and 30 years go by and I realize, man, Eddie was so right. At 16 I thought 10 years was a long time, and in December it will be 34 years that I’ve been riding. I’ve been blessed and fortunate to do something I was passionate about and loved doing for so long.”

On October 25, closing day of the Santa Anita fall meeting, Gryder said it hit him that he was about to make his last ride at The Great Race Place. His mother, who hadn’t been to the Arcadia track in many years, was in attendance. So, without fanfare, he made the announcement to Brittany Eurton on TVG. Del Mar’s Bing Crosby meeting would be his swan song.

Gryder has eight stakes victories here. The first two came as an 18-year-old in 1988 in since-discontinued events, the Junior Miss (Executive Row) and June Darling (Bayakoa). Then comes the 19-year gap before he’s back in the record book with two in 2007 and three in 2008. The biggest of the latter group was the 2008 San Diego Handicap aboard Well Armed for trainer Eoin Harty and owners William and Susan Casner. 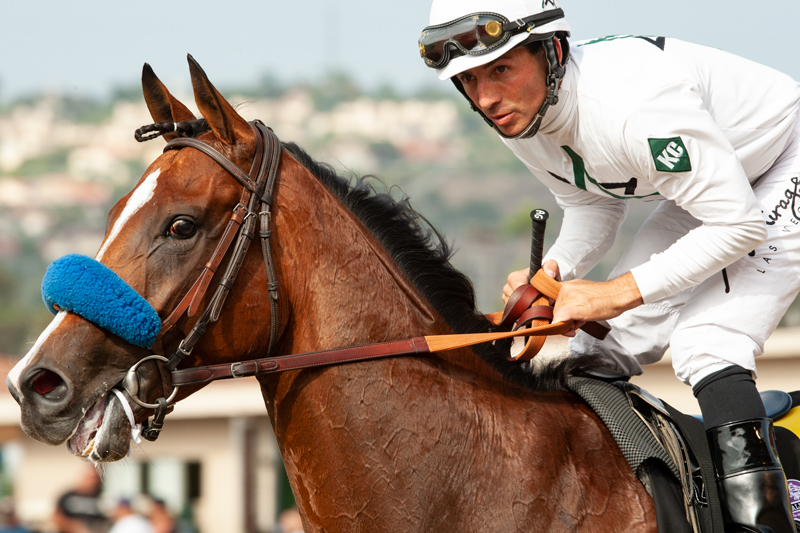 Gryder does not jump at the chance to pronounce Well Armed the best horse he’s ever ridden. He points out that there have been a lot of good ones.

For one example, Gryder was the only jockey other than Patrick Valenzuela and McCarron to ride Sunday Silence in the Hall of Fame horse’s 14-race career. Gryder was aboard in an allowance race at Hollywood Park on December 3, 1988 that concluded Sunday Silence’s 2-year-old campaign. Leading most of the way, they lost by a head to another precocious juvenile named Houston.

Another example: the Hall of Fame mare Bayakoa. Gryder got the call from Hall of Fame trainer Ron McAnally for five straight starts beginning with the Osunitas here in August of 1988, through a 10-length victory in the June Darling in September to a December allowance at Hollywood Park, the build-up for momentus campaigns by Bayakoa in 1989 and 1990.

But Well Armed … that’s quite a story.

As a 3-year-old, the gelded son of Tiznow had undergone surgery for bone chips in his knees and, while in the recovery phase, sustained a fractured right hip in a stall accident. Bill Casner made it a personal mission to rehabilitate Well Armed with the vision of having him race again. The quest, in part, was therapy for Casner, who had lost his youngest of two daughters, 23-year-old Karri, one of 202 killed in a terrorist bombing in Bali in 2002.

Casner oversaw hours and hours of Well Armed swimming at a facility at his Texas ranch to regain strength and muscle tone for a racing return, then sent him to Harty at Santa Anita.

“Santa Anita had just installed a synthetic surface and they were looking for horses to work on it to test it out,” Harty recalled. “I volunteered Well Armed because I thought it would be a good opportunity to work on a pristine surface, see how well he was doing coming back from the injury layoff and get feedback from Aaron for the owner and myself.

“It was mutually beneficial to all.”

There was, Harty said, a rapport established between Gryder and the horse and the “fit” that trainers often ascribe to a horse and rider was obvious. Gryder was aboard for seven races over a seven-month period that had its ups and downs but generated some extraordinary moments of inspiration. 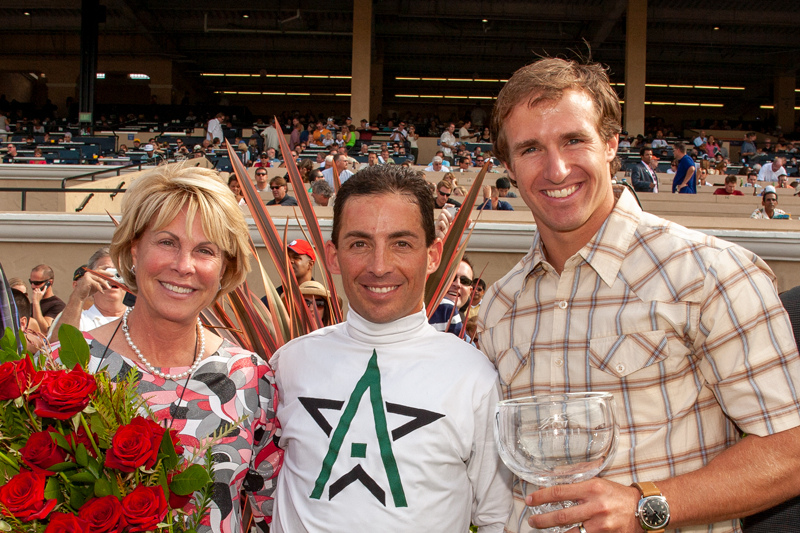 July 19, 2008 – Well Armed went wire-to-wire in a 1 ¼-length victory in the San Diego Handicap over Del Mar’s one-year-old Polytrack surface. “A great race for him,” Harty said. “Once we started working the horse, we knew he had the capability to be a really top class horse and it (San Diego), to be honest was a mere formality.”

August 24, 2008 – Well Armed was second, at odds of 8-1, caught late in the stretch to lose by a neck to Go Between the in $1 million Pacific Classic.  “I was surprised he got beat, but the other horse just ran a great race,” Harty said.

March 28, 2009 – With one win to show in four starts since the Pacific Classic, the now 6-year-old Well Armed rockets out of the gate and is never headed, winning by 14 ½ lengths in the $6 million Dubai World Cup. Gryder wears Casner silks that bear Karri’s initials on the sleeve.

“She rode that horse with me,” Gryder would say in post-race interviews. “Riding at night, you can watch for shadows to see if there’s anybody coming at you and I could see they weren’t gaining on me.”

“It was an emotional night, knowing what the horse and the Casner family had suffered through,” Harty recalled. “But it all came together so well.”

By personal count a few years ago, Gryder had made 17 trips to Dubai in his career, 28 to Saudi Arabia and several others to Hong Kong, England and Canada during the globe-trotting career that’s he’s about to end. 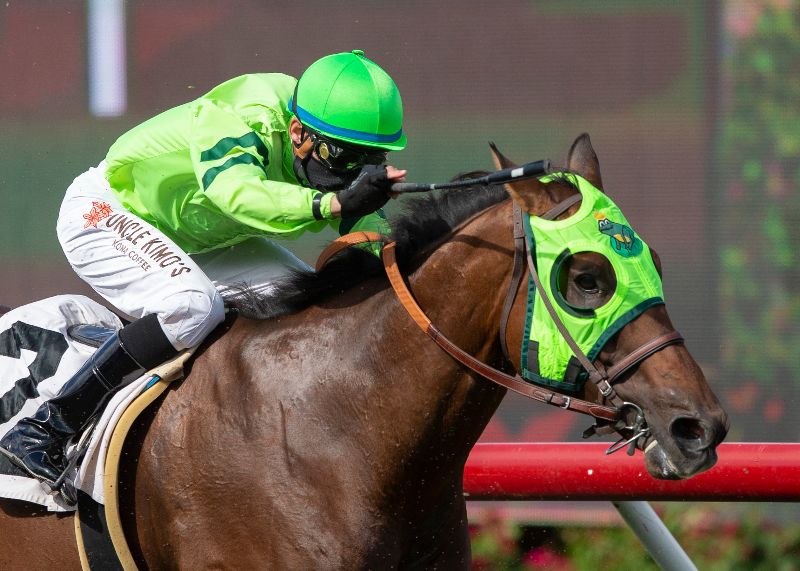 Gryder was married for 15 years but is now divorced. He has a 20-year-old son and a daughter who recently graduated from high school. His son is a Marine stationed in, of all places, Dubai, where he’s among those guarding the U.S. consulate.

“It’s ironic that my son’s first station is in Dubai and I won the biggest race in the world there,” Gryder conceded. “It’s nice that I know where he’s at and I can picture it and in a way it’s comforting that he’s there.

“I’m lucky to have two wonderful children that have made good choices and are doing well,” Gryder said. “We missed a lot of time together with my travelling so much during my career but their mother raised them to be respectful to everyone.”

Besides riding, Gryder’s resume includes TV credits (“The Sopranos,” “Dellaventura,” “Jockeys”), racing commentating and racetrack PR work. He has a wide range of interests outside racing. What’s next?

“No definite plans,” Gryder said. “It’s been encouraging that I’ve been contacted by people in different businesses. I want to enjoy riding this meet and think about (the future). I want to make a decision by the end of the year and when I do, I’ll know it’s the right one for me. Whatever I do, I’m going to go all in and dedicate myself to it the same way I did with horse racing.”

Harty is, undoubtedly, one of many wishing Gryder well.