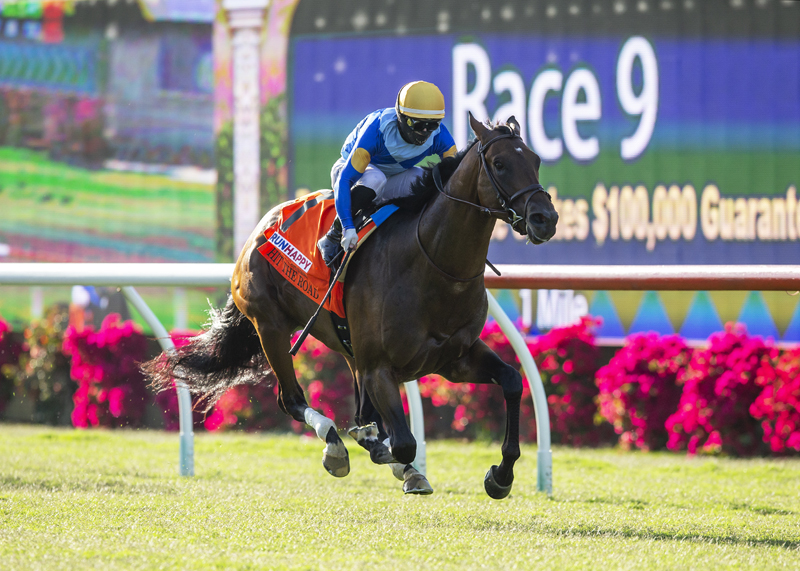 European veteran Umberto Rispoli made his Del Mar debut a notable one by winning three races – including the featured Runhappy Oceanside Stakes – as Del Mar kicked off its 2020 season with nary a fan in the stands.

The shore oval began its 81st season in fine fashion on the racetrack and in the counting house, but it surely missed its usual crowd of 40,000 or so party goers who traditionally make the Opener a love-in as they welcome racing back to San Diego.

“We’re racing and we’re going to continue to race this summer,” said DMTC’s CEO, Joe Harper. “We’d love to have our fans, of course, but we’re delighted to be racing.”

Rispoli, the 31-year-old Italian rider who has made a serious impact in the riding scene in Southern California in the past year, saved ground nicely with his More Than Ready colt Hit the Road, then when a slight hole opened turning for home on the Del Mar turf course, gunned him through the middle and went on to tally impressively by a length and three quarters.

The Kentucky-bred is owned by Daniel Koetteing’s D K Racing, Kyle Yost’s Taste of Victory Stables and Rick Gold and is trained by Dan Blacker.

The overall racing was highly competitive (seven of the 10 races called for photo finishes to decide the winner) and cleanly run. The good start to the 28-day session bodes well for more good racing to follow on the track’s Friday-Saturday-Sunday weekly schedule leading up to a Labor Day Monday (September 7) finale.

UMBERTO RISPOLI (Hit the Road, winner) – “I think Dan (trainer Dan Blacker) has done a terrific job with this horse. He ran a very, very good race today. He broke really well and so I could take the rail. I had a lot of horse; more horse than I thought. Maybe I could have won this race by more. I love being in California; it feels like home. I’m working hard every day and having some results. Everyone told me about Del Mar and Opening Day, what a big deal it is. But we can’t have the fans now; too bad. But right now I’m still loving Del Mar. It’s a good day for me.”

DAN BLACKER (Hit the Road, winner) – “I’m just thrilled to win a big race on opening day at Del Mar. The Oceanside is like my Kentucky Derby. It’s unfortunate that there were no fans, but that’s the way things are. Umberto (Rispoli) ran a faultless race and the horse is super talented. You can put him on the lead or take him back and Umberto put him in a perfect spot.”

The victory by Rispoli was his first stakes win at Del Mar.

The victory by Blacker is his second stakes win at Del Mar and first in the Runhappy Oceanside.