<‐ Favored Maximum Security Best in $500,000 TVG Pacific Classic
"Solid-Guy" Matt Chew is Off to a Special New Life Outside Racing ‐> 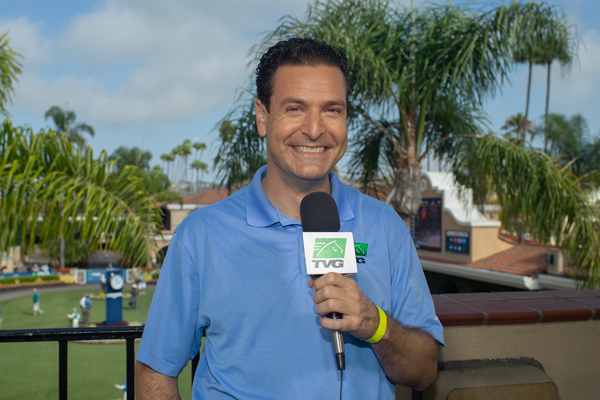 John Lies, a seasoned race caller who has worked at Del Mar since 2007 in different capacities, will take over the mic for the final four days of the current summer season as Larry Collmus, who has been pinch-hitting since opening day for regular announcer Trevor Denman, heads off to Kentucky to prepare for his annual role with NBC as the race caller for the Kentucky Derby.

Lies (pronounced “Lees”) has called races at locations around the U.S., including 10-year stints at both Lone Star Park in Texas and Kentucky Downs, as well as at his current jobs at Will Rogers Downs and Fair Meadows Tulsa in Oklahoma.

Collmus, a nationally-known announcer who has worked at racing venues around the country and has been the voice of the Triple Crown since 2011, stepped up and in at Del Mar when Denman, Del Mar’s caller since 1984, told the track he was going to stay home in Minnesota this summer in light of the COVID-19 situation. In his role as a “pinch hitter,” Collmus’ professionalism and enthusiasm have shone through at the seaside oval since he took up the mic on July 10.

Collumus will call his final Del Mar card on Monday, August 31 and then head off for his assignment at the delayed Kentucky Derby scheduled for Saturday, September 5. Lies will call the four remaining programs of Del Mar’s 81st summer season – September 4, 5, 6 and the Labor Day finale on September 7.

Lies, 43, was born in Long Beach, CA, but grew up mostly in the San Diego area. His father was a trainer and young John’s racing interests found him imitating the calls of his hero, Denman, accent and all. When he met the South African caller at the age of 9 at Del Mar, a friendship was formed and his role as hero/mentor all but ensured that young Lies had found his calling.

Besides his full-time announcing jobs, Lies estimates he has guest announced at a dozen tracks nationally, including twice at Del Mar. Additionally, the savvy racetrack veteran has filled many different roles at various venues around the country. At Del Mar he’s been its simulcast signal announcer since 2007, has worked in its racing office since 2013 and this year took over the job of morning line maker. At both Will Rogers Downs and Fair Meadows Tulsa he is the announcer, the racing secretary and the morning line maker.

Denman has told Del Mar officials that he plans on returning to his regular role at the track with the start of its fall season on October 31.