Mike Smith: He's One of Many, But Surely One of the Ones

Here’s an easy one for most folks: What’s the most common last name in America?

Bet you didn’t even have to Google that one (though you can and they’ll confirm it).  Sure, it’s Smith.

Naturally enough, a fair number of famous folks carry that moniker.  For instance, tie in these distinctive first names with that overwhelmingly common last one -- Bessie, Bubba, Dean, Emmitt, Keely, Lovie, Maggie, Ozzie, Stephen A. and Will. You can just about see them all, can’t you?

The on-line site Ancestry.com lists over one billion people with the last name Smith. Good luck to all you researchers there. Anyway, by now you’re getting the point.

So perhaps a guy shouldn’t have been surprised when he went to the keeper of the records in the world of horse racing -- the all-encompassing Equibase.com -- to check up on a fellow with that common name who has done so many uncommon things on the back of a horse. Sure enough, our local star Mike Smith was there. He had to be. But, surprisingly, so were 77 other riders named Smith.

That list starts with a gentleman named Andrew Gary Smith, who was last spotted riding at Mt. Pleasant Meadows in Mt. Pleasant, Michigan in 1994. It ends with Woodrow Frank Smith, Jr., who was plying his trade at Will Rogers Downs near Tulsa, Oklahoma in 2008.

Stretching back farthest on the Smith List is Bobbie Smith, who apparently last rode in 1964 at Chouteau County Fair, which is in Fort Benton, Montana, a mere couple of furlongs north of the Missouri River and just northeast of Great Falls. The 107th edition of that Fair will be held again this year but, alas, without Bobbie Smith or horse racing this time. There will, however, be a demolition derby and pig wrestling.

Other Smiths on the list include Clive, Cornelius, Cynthia, D.D., D.D.X. and D.Y. Then there are Gordie, Gordon and Guy, followed by Jackie, Jacob, Jeff, Jerome, Jerry and Jimmy.

Dropping down to the Rs – which contain R.D., R.W., Rebecca, Richard Sims, Robert and Robert A. – there is a name racing fans with a bit of history under their belts should recall. Robyn C. Smith, a tall (5’7”) lady with a passion to ride (she did so between 1969 and 1980) who got her name in the history books when she became the first female to win a major stakes at a major track by capturing the Paumonok and the Westchester handicaps at Aqueduct in 1973 on a colt named North Sea for Alfred Gwynne Vanderbilt. Later, she got a little further into those history books when she married a pretty fair hoofer named Fred Astaire, even though he was 45 years her senior.

(Robyn Smith also was, as the turf writers like to say, a helluva quote: {On starting out as an exercise girl in California} “The horses weren’t so scared, but boy, I was. Invariably, they’d run away with me, but it was dark in the morning that time of year and (trainer Bruce) Headley couldn’t see. One day, when it got lighter in the morning, he said: ‘Gee, you don’t gallop real good, do you?’”)

But back to the Smith List: Let’s note T.J., T.R., Tim, Tina, Todd and Tracy. And finish up strong with W.T., Wade, Wayne, Wes, Wilbert Patrick and William.

And if you narrow it down to riders named Smith who are riding in 2019, the list stands at eight:  Clyde Henry, Cody Rodger, Diogdinabi, Janine, Kevin J., Stormy and Taylor E.

And, of course, the fellow that this whole stroll down Smithville is all about – Mike E. (for Earl) Smith.

Our man Mike, who is currently in the middle of his 38th year of horsebacking with most of his summers since 2001 spent at Del Mar, is nothing short of an athletic wonder. Consider, please, the fact that he is 53 years old (and will turn 54 on August 10), yet here he is in a sport where he is competing mostly against teenagers and 20-somethings who were kicking the slats out of the cradle when he already had legged up on tens of thousands of mounts and had ridden thousands of winners.

Name me if you can – in any physical sport in the world -- another athlete in his mid-50s that takes on young boys/men and takes them to school. Mr. Smith doesn’t just battle them, which is a major accomplishment in itself, he shows them how it is done. When the money is down, he is called up -- from coast to coast. It’s why he goes by the nickname “Big Money Mike.”

(The story is told about workout-warrior Smith – who has a personal trainer both here and in Los Angeles for his ferocious daily gym go-rounds that normally last a couple of hours – that on more than one occasion he’s agreed to allow an I-wanna-be-like-you young rider to come along and mimic “the old guy” as the bike was ridden, the iron was pumped and the sweat flowed. The story always seems to end with the young rider excusing himself before the session was done.)

Smith once rode and won a match race by a substantial margin at Del Mar a couple of years back and, upon dismounting, was asked if he thought his horse was that much better than his rival. His reply was something to the effect of – “No, not really. If I’d ridden the other horse, I would have won on him.” It was stated without a trace of bravado or ego. It was said simply as a statement of fact. When you’ve been on the backs of racehorses in action since days as an 11-year-old in New Mexico, and when you have total confidence in yourself and your ability to communicate and draw the best out of those high-strung speed machines, you can make statements like that and know you are correct.

When you look at Smith’s records, they either fall into the “remarkable” or “I-can’t-believe-it” categories. He has ridden more than 5,500 winners. (Realize that the majority of riders currently in the game have not been aboard 5,500 mounts, never mind that many winners.) He has won more than $323-million in purses. (Third-highest in the history of the game.) He has won 26 of the Breeders’ Cup’s $1-million-plus races. (The next nearest to him is John Velazquez with 16.) Going into 2019, he had won a staggering 587 Graded stakes races. (And, equally staggering, 207 of them -- more than one third – have been Grade Is.)

Realize further that he was considered so good at the business of riding that the powers-that-be put him in racing’s Hall of Fame 16 years ago. And that he has only gotten better since then!

He has won more than $10 million in purses 16 times, with seven of those coming in the last seven years. His best year ever for money won -- $20,540,871 – came just two years ago in 2017. Last year, he took down the jockey’s Holy Grail when he gave the mercurial Justify three picture-perfect rides to win the Triple Crown. 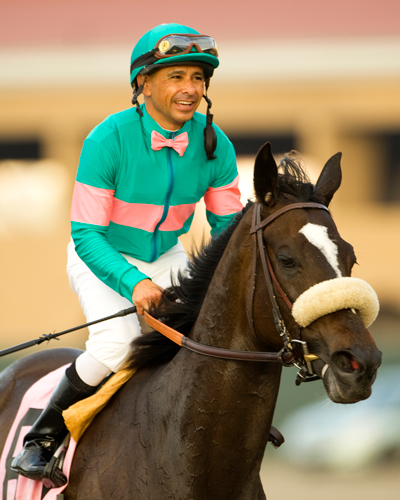 He has ridden more good horses – more champions, more Horses of the Year, more star-of-stars – than you can shake a proverbial stick at. The heroes and heroines are many: Azeri, Skip Away, Zenyatta, Holy Bull, Lure, Sky Beauty, Heavenly Prize, Royal Delta, Shared Belief, Arrogate and Songbird serve as a good starter list.

(If you want to give yourself a sweet racing chill, go to YouTube and dial up Smith’s November 7, 2009 piece de resistance aboard Zenyatta when he and his mighty mare came rambling from last to beat the big boys in a Breeders’ Cup Classic for the ages.)

And how has all this affected him? Just how large has that head swollen? Well, if you’re thinking that way, you couldn’t be more wrong. Smith, it seems, has become more humble, more kind, more appreciative as his treasure chest of glory has grown larger. He readily steps up to speak well of his sport. He treats fans, owners, trainers and fellow jockeys with deference and class. He’s instinctively willing to come forward for a racetracker in need or a worthy cause. And he’s always ready and able to sparkle in a TV interview, or light up a room with his 1,000-watt smile.

Yes, he’s a Smith – just one among many of those. Conversely, he’s Mike Smith, the one that many wish they were. In any case, let’s all enjoy him this summer at Del Mar as he most certainly stands out in a crowd.