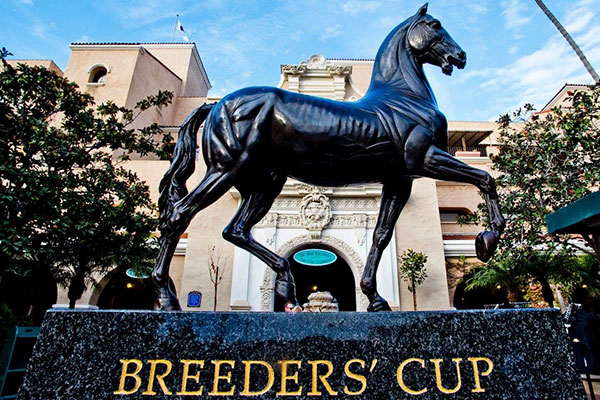 Breeders’ Cup, one of Thoroughbred horse racing’s most prestigious international events, today announced Del Mar racetrack in Del Mar, California as the host site for the 2021 Breeders’ Cup World Championships on Friday, November 5 and Saturday, November 6. This will be the second time that Del Mar - where the Turf meets the Surf - will serve as the event’s host site.

A formal announcement will take place in the Del Mar paddock at 2:30 p.m. PT today and will also be streamed live on BreedersCup.com and the Breeders’ Cup Facebook page.

Breeders’ Cup also announced today that the event will return to Santa Anita Park in Arcadia, California on November 1–2 in 2019 and to Keeneland Race Course in Lexington, Kentucky on November 6–7 in 2020. The three-year announcement reflects Breeders’ Cup’s forward-thinking growth strategy to showcase the best tracks across the country and allow for ample lead time to engage local communities ahead of each event.

Breeders’ Cup’s decision to return to Keeneland and Del Mar is a testament to the brand’s effort to offer a more elevated and enhanced fan experience by bringing the event to more intimate venues. With a renewed focus on patron experience and event logistics, the 2015 and 2017 renewals of the World Championships produced record-breaking ticket sales revenue and on-track wagering revenues, respectively. Fans are encouraged to visit www.breederscup.com/2021 to sign up for ticket information.

“The Breeders’ Cup World Championships had an incredibly successful debut last year at Del Mar and surpassed every expectation for both Breeders’ Cup and the Del Mar Thoroughbred Club.” said Breeders’ Cup President and CEO Craig Fravel. “We are thrilled to collaborate with the Del Mar, Solana Beach and San Diego communities to once again create a world-class horse racing and entertainment experience at this remarkable location.”

Known for its scenic locale on the shores of the Pacific Ocean and prestigious summer meets, Del Mar underwent an extensive development process to expand its luxury seating options and infield experiences for its first Breeders’ Cup in 2017. The Breeders’ Cup debut at Del Mar resulted in a record-breaking, two-day on-track wagering mark, while also generating an estimated $96.8 million in economic benefits for San Diego County.

“Del Mar is delighted to again be hosting our sport’s championship days,” said Del Mar Thoroughbred Club’s chief executive officer Joe Harper. “We know we put on a good show here in 2017 and we look forward to presenting an even better one in 2021.”

About Del Mar: Del Mar, just a few furlongs from the Pacific Ocean, has been a racing destination since its founding in 1937 by entertainment icon Bing Crosby and a crew of his Hollywood pals. Owner-breeder Crosby, known as the original laid-back Californian, put his special stamp on the place “where nobody’s in a hurry but the horses.” Bing penned and sang a ditty called “Where the Turf Meets the Surf” in 1938 and the song is still played today at the start and finish of every card. The seaside oval is one of America’s racing stalwarts, a proving grounds for stars-in-the-making and stars-in-fact guided by first-rate horsemen and enjoyed by enthusiastic crowds all summer long. Del Mar also conducts a second racing meet – the Del Mar Fall Racing Festival – during the month of November. For more information, call 858-755-1141 or visit DelMarRacing.com. You can follow Del Mar on Instagram and Twitter at @DelMarRacing or become a fan on Facebook @DelMarRaces.